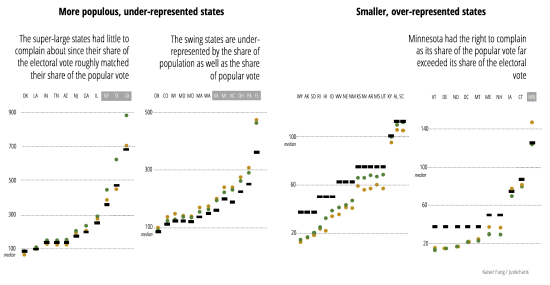 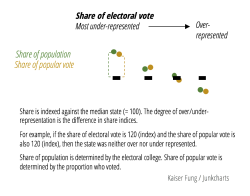 The National Popular Vote bill is 61% of the way to guaranteeing the majority of Electoral College votes and the presidency to the candidate who receives the most popular votes in the country, by changing state winner-take-all laws (not mentioned in the U.S. Constitution, but later enacted by 48 states), without changing anything in the Constitution, using the built-in method that the Constitution provides for states to make changes.

All voters would be valued equally in presidential elections, no matter where they live.
Candidates, as in other elections, would allocate their time, money, polling, organizing, and ad buys roughly in proportion to the population

Every vote, everywhere, for every candidate, would be politically relevant and equal in every presidential election.
No more distorting, crude, and divisive and red and blue state maps of predictable outcomes, that don’t represent any minority party voters within each state.
No more handful of 'battleground' states (where the two major political parties happen to have similar levels of support) where voters and policies are more important than those of the voters in 38+ predictable states that have just been 'spectators' and ignored after the conventions.

The bill would take effect when enacted by states with a majority of the electoral votes—270 of 538.
All of the presidential electors from the enacting states will be supporters of the presidential candidate receiving the most popular votes in all 50 states (and DC)—thereby guaranteeing that candidate with an Electoral College majority.

In 2017, the bill has passed the New Mexico Senate and Oregon House.
The bill was approved in 2016 by a unanimous bipartisan House committee vote in both Georgia (16 electoral votes) and Missouri (10).
Since 2006, the bill has passed 35 state legislative chambers in 23 rural, small, medium, large, red, blue, and purple states with 261 electoral votes.
The bill has been enacted by 11 small, medium, and large jurisdictions with 165 electoral votes – 61% of the way to guaranteeing the presidency to the candidate with the most popular votes in the country