This chart uses three speedometers to tell the story that Microsoft's Edge browser is faster than Chrome or Firefox. These speedometer charts are disguised racetrack charts. Read last week's post first if you haven't.

Richard complained the visual design distorting the data. How the distortion entered the picture is a long story. Let's begin with an accurate representation of the data:

Next, we pull those speedometer curves straight:

While the three values are within 10 percent of each other, the lengths of the two shorter curves are only 40-50 percent of the length of the longest one! This massive distortion is due to not starting the axis (i.e., speedometer) at zero.

We now put the missing 25,000 back onto the chart, proportionally expanding each bar. As seen below, fixing the axis does not get us back to the desired relative lengths, so some other distorting factor is at play. 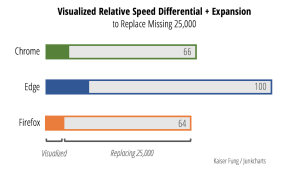 The culprit is that the middle speedometer is 44 percent larger than the other two. If we inflate the side bars by 44 percent, the world is made right again. Phew! 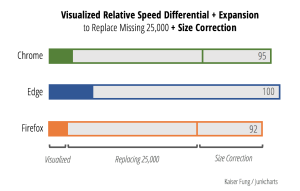