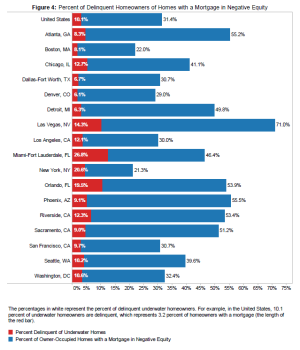 This chart (shown right), published by Zillow in a report on housing in 2012, looks quite standard, apparently avoiding the worst of Excel defaults.

What are some details that I caught my eye on this chart?

Readers have to get over the hurdle that “negative equity” is the same as “underwater homes.” This is not readily understood unless one reads the surrounding text. For example, the first row for the U.S. average proclaims that 31% of U.S. homes are “underwater” and among these underwater homes, 10% of the mortgages are delinquent. The former is concerned with the valuation of the property while the latter deals with payments or lack thereof.

According to the legend, the blue segments stand for the proportions of underwater homes in different metro areas but it’s not quite true – the blue part represents underwater but not delinquent mortgages while the red and blue combined represents all underwater mortgages. This is a common problem in stacked bar charts.

The metro areas are in alphabetical order by city, which means an opportunity is missed to help readers discern patterns. Patterns related to city-name alphabets is not of interest to most (except certain econometrics journal editors). Try arranging by region, or by decreasing level of negative equity, or some other meaningful variable.

The designer tried to do something clever with the horizontal axis labels and I don't think it succeeds. To see what is going on, read the note below the chart. The trick is to let readers look at the number of underwater and delinquent mortgages in two ways, as a proportion of underwater mortgages (through the white data labels) and as a proportion of all mortgages (through the axis labels). That's a mess, sorry to say.

I just created a couple of examples here: 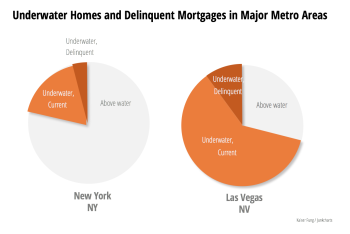 The deep orange sector can be compared to the entire circle, or to the larger orange sector. Readers usually don't have a problem with pies with only three slices.

Here's a quick R script for bar plots comparing all the listed places and the resulting image:

I am having a very hard time seeing how the pie chart solves this problem in a way that a stacked bar chart does not.

I think you've perhaps given too much credence to their attempt to be clever as well - unless I've missed something, they haven't done anything to the axis labels, they've simply added data labels that present a different measure than the axis labels do.

I certainly agree that the original chart is not ideal to represent this information. I also remade the chart as a better version of a stacked bar, here:

If I really needed to present the specific different percentages, I would add a table.

What am I missing that makes the pie chart better?

jlbriggs: Nice idea with the vertical US average lines!
However, we have a different understanding of the original numbers (not our fault!).
Using the US-average as example: I understood delinquent to be 10.1% of 31.4% underwater, hence 3.2% of total mortgage owners.
Same with the cities... You can see how the values in our charts differ. I have Las Vegas total underwater at 71%, in your graph it is displayed at slightly over 80%.

@berry - good catch. Just sloppy math on my part while trying to throw this together between work tasks :)

Ideally I would also add something to the chart that explained the breakdown precisely. Some brackets along the top or bottom bar with a "31% of homes underwater, of which 3.2% are also delinquent", for instance.

While I wouldn't have a problem with a single pie chart displaying this type of relationship, I don't think 18 such pie charts would be a very effective way of getting this message across.

Berry/jlbriggs: Good discussion and thanks for the visuals. I agree that having an entire wall of pie charts is an eyesore. And I agree a stacked bar chart version is competitive. For more than three segments, stacked bar charts also have issues from the perspective of presenting multiple series of proportions with different bases.
What we learned from this discussion is that the key improvements are (a) adding back the "missing" segment (the not-underwater mortgages) and (b) fixing the labels to describe the segments accurately.