Junk Charts
Welcome Twitter About Book Blog RSS
The less-is-more story, and its meta
The art of arranging bars

Wheel of fortune without prizes: the negative report about negativity

My friend, Louis V., handed me a report from Harvard's Shorenstein Center, with the promise that I can make a blog post or two from it. And I wasn't disappointed.

This report (link) caught some attention a few months ago because of the click-bait headline that the media is "biased" against Trump in his first 100 days. They used the most naive definition of "bias". The metric is the amount of coverage that is "negative," with the unspoken standard that the media should be 50% negative.

In the court of law, it is already established that, for example, a loan company cannot be sued for racial bias simply because the rejection rate of loans for black Americans is higher than that of white Americans. Similarly, a university is not necessarily biased against black applicants even if the proportion of black students is found to be below the national proportion of black Americans (in a statistically significant way).

The appropriate amount of negative coverage is a function of the content of the President's actions, which is a hard standard to nail down, much harder than the two examples shown above - which just says that such an analysis is futile from start to finish. Let alone the irony of generating a negative media headline criticizing the negative tone of media coverage.

Now let's turn to their use of visuals. The following pair of pie charts is used to show the differences in coverage between U.S. and European media.

These pie charts are inspired by Wheel of Fortune, without the prizes. 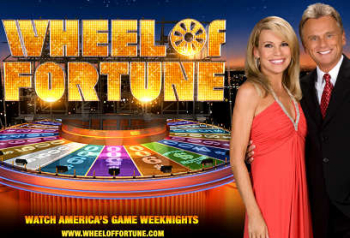 Notice how our attention is caught by certain colors (red, orange, etc.) and the size of the slices. The largest red slice is labeled "Other Foreign/Defense" in the U.S. pie chart, although it did not merit a mention in the accompanying writeup so it's not clear what that category means.

Instead of ordering the slices by their sizes, the design puts the larger slices as far apart as possible. Further, each color is used twice in a mirrored way, causing us to infer an association between categories that don't exist.

There are lots of conventional ways to display this data better. I decided to experiment with word clouds (using the Wordle tool).

Here is one in which the color indicates whether the coverage is American or European. Each word appears twice, and in proximity to one another for comparison. 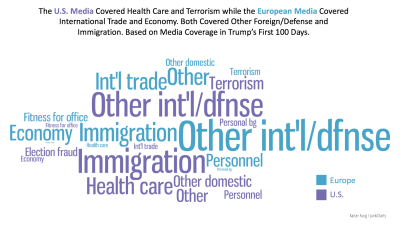 One can directly compute a discrepancy metric between the two regions. This next chart shows the difference in importance accorded each topic by American versus European media: 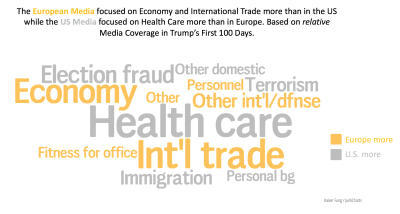