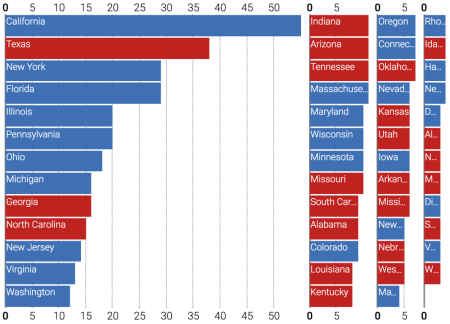 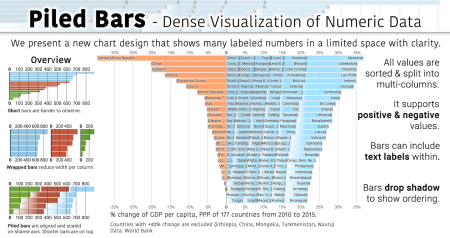 Thanks for the review, Kaiser!

I am glad you found the three tasks (comparison, ranking, distribution) highly appropriate! In our GI2017 paper, we compared treemaps vs. wrapped bars for these tasks, and found that wrapped bars is perceptually and significantly more accurate than treemaps in many cases. It is probably no surprise (area encoding on a flexible layout vs. length encoding in a targeted columnar layout). However, given the wide practice of throwing tree-maps for the visual appeal and ease of learning, I think this is an important take-away for practitioners.

We had also tested piled bars design using crowdsourcing. Unfortunately, the results couldn't make it into published work. However, we found that getting used to reading piled bars design is not as trivial as it is to learn treemaps or piled bars. The overlapping nature likely made people discard the section of the bars under others, or that the bars do not extend to the baseline.

As a last note, I want to touch on your mention of the use of dot-plots instead of bars. It seems Daniel Zvinca had a similar idea, potentially developed separately. He worked with Stephen Few to generate some results and discussions:
https://www.perceptualedge.com/articles/visual_business_intelligence/journey_to_zvinca.pdf Their report extends on the design space of this multi-column, single-scale bar chart idea to present many more numeric values in a compact space.

Let's hope these chart variations will help others better communicate a dense set of numeric values with higher accuracy and visibility. To create wrapper and piled bars design, I released an open-source JS library adilyalcin.me/chubuk.js I hope that's a good first step for re-use and further development:)