I was looking at some Canadian data graphics while planning my talk in Vancouver this Thursday (you can register for the free talk here). I love the concept behind the following chart: 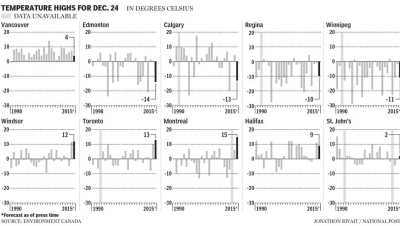 Based on the forecasted temperature for 2015 (specifically the temperature on Christmas Eve), the reporter for National Post asked whether the winter of 2015 would be colder or warmer than the winters on record since 1990. The accompanying article is here.

The presentation of small multiples encourages readers to examine that question city by city. It is more challenging to discover larger patterns.

Here is a sketch of a different take that attempts to shed light on regional and temporal patterns: 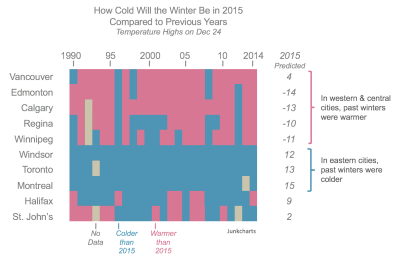 I am not sure why certain cities had no record of their temperature in certain years (machine malfunction?). In fact, one flaw in the original chart is the confusing legend that maps the grey color to "Data Unavailable" when most of the columns shown are grey. 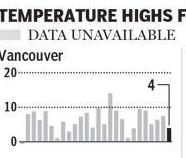