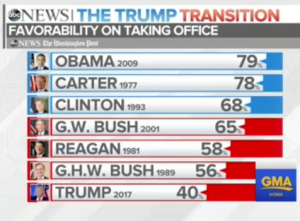 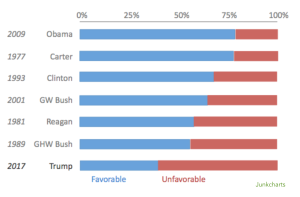 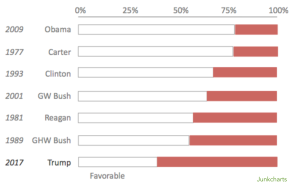 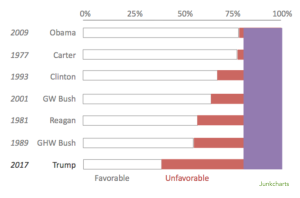 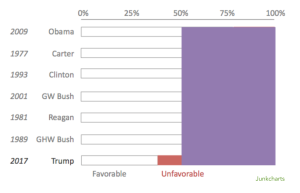 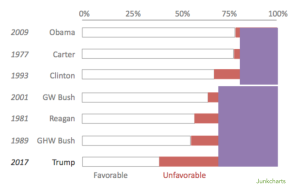 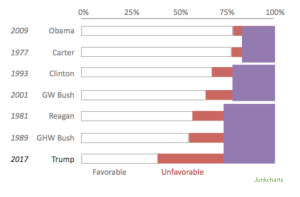 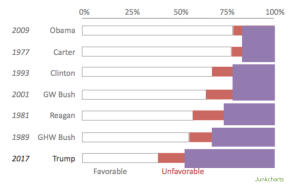 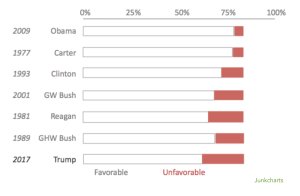 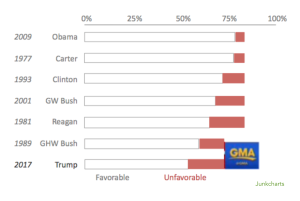 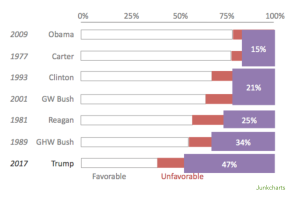 "Faking charts can take as much effort as making accurate ones."

Based on this walk-through, I would say it takes decidedly more effort to fake it!

Why would they want to fake it?
Do you really believe ABC is shilling for Trump?

Rather than faking it, they are probably driven by a need to make the chart look right. Making the lengths correct would either require small text or a wide chart with lots of white space. After all, including the numbers fairly much gives the game away.

I don't know. In my experience, Hanlon's razor of "never attribute to malice that which is adequately explained by stupidity" [1] is a very good guide for real life.

I think what really happened here is that the designer was desperately trying to find a way to display the names overlaying the bars in a way that they area readable even on old NTSC TV sets. So what he did is, he took your original bars and then just clipped and clinched them horizontally such that they only take up half of the screen to give enough space for the names. And then, to make it look good, he used the white bars as background for the names on the left hand side. This is also why he chose the confusing color scheme: With red bars (instead of red "emptiness") the names would probably become illegible on old TV sets.

I made you an illustration:
https://framapic.org/j0oLz9JEruSV/sUhGcxl0xNcJ.png

Alex: Interesting idea that they may have chopped off both ends. Note that I did not attribute any malice on the ABC designer - I have no claim on knowing why they did what they did, and deliberately chose to present this as a general comment on how to fake charts. So you can say I used Hanlon's razor.
More generally, I don't know how one can square Hanlon's razor with plausible deniability which is widely practiced. The same thing with manipulation of college rankings that I discussed in the book. There are lots of ways to nudge the statistics replete with normalizing explanations for those acts. One quick example: many schools switched to "Common App" saying that this levels the playing field - a clear effect of this is to increase drastically the number of applications received, which directly improves selectivity rate.

I'm on Alex side. I found the five axis cuts very intricated. So, even if I could give some credibility to malice, I think that Alex recreation is the best because it is far better simpler than the "five axis cuts": Occam's razor holds besides Hanlon's razor.
On the other hand (on the side of the sister blog), I wonder what the chart means. In particular I have a question, since I do not know the victory percentage of each presidential election.
Does it mean that democratic presidents have won their elections with greater margin than republican ones, or that republican electorate is more democratic than democratic one (excuse me the word pun), since it acknowledge the other party victory more frequently?
Moreover, are we sure that the polls behind the chart are trustworthy? Indeed, we are speaking of a president who is making what he has promised, and previous polls about him have been proved not so affordable. As a foreigner observer, I'm shocked by the paroxysmal and furious press campaign against Trump.