Race to the top, Erasmus edition

(This is a submission from reader Lawrence Mayes. Thank you Lawrence!)

I came across this unusual graphical representation of the destinations of scholarship students: 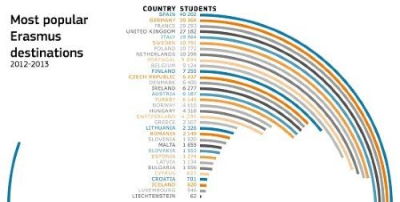 [Kaiser here: The charts are hidden inside an annoying Flash app and it seems that the bottom half of the chart is cropped out.]

The question is: what parameter is used to illustrate the figures? - Line length or angle?

The answer is - line length. But the eye is likely to use the angle as the measure and this is where an error may arise. It's almost an optical illusion - the smaller number of students lie on the circumferences of smaller circles - and a smaller length goes further around the circle. Thus, for example, Turkey attracts about one fifth of those students attracted by Germany but it looks like it's nearer half (45 degrees vs 90 degrees).

(The case of Spain is really bizarre - it looks like it's gone round the circle by over 280 degrees but actually what they've done is to break off the line at 90 degrees and stick the bit they broke off back on the diagram at the left.)

I have never seen this type of 'bar chart' before but it is really misleading.

Long-time readers may remember my discussion of the "race-track graph." (here) The "optical illusion" Lawrence mentions above is well known to any track runner. The inside lanes are shorter than outside lanes, so you stagger the starting positions.

As far as I can tell, the bottom half of the chart is not cropped out - the graph is supposed to be just half the track, with Spain's line cut-and-pasted into the left half of the graph. If you look at the PDF report on the page you linked, you will find many "half-donut" graphs - really bizarre, but fitting the theme.

What would be interesting is to see a comparison between number of scholarship students versus population size of the country, possibly just a scatterplot. Log scaling may also be helpful.

These exchange student programs can be interesting. We have a few Germans at our university, some excellent, some that don't bother attending anything. Apparently if they fail it doesn't appear on their academic transcript at their home university so they just see it as a paid holiday, although they still acquire a higher education debt. Maybe explains the popularity of Spain.