Junk Charts
Welcome Twitter About Book Blog RSS
Sorting out the data, and creating the head-shake manual
Story within story, bar within bar

The following chart traces the flow of funds into AI (artificial intelligence) startups. 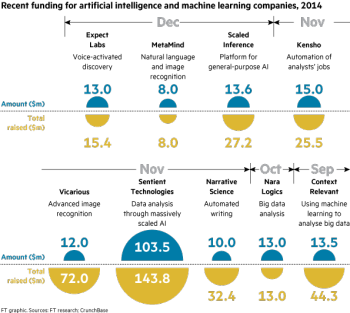 I found it on this webpage and it is attributed to Financial Times.

Here, I apply the self-sufficiency test to show that the semicircles are playing no role in the visualization. When the numbers are removed, readers cannot understand the data at all. So the visual elements are toothless. Actually, it's worse. The data got encoded in the diameters of the semicircles, but not the areas. Thus, anyone courageously computing the ratios of the areas finds their effort frustrated.

Here is a different view that preserves the layout: 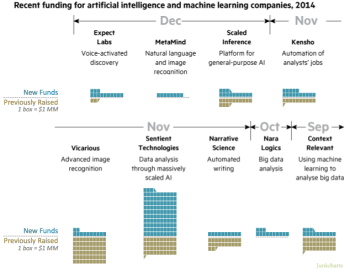 Better. But it's still maddening - time is running from right to left and bottom to top, and you might think you could compare vertically but you can't because December is stacked over November and (part of) November over October AND September.

Alex: You figured out why I imposed a constraint on my reworking :)