If you type "two Americas map" into Google image search, you get the following top results:

Designers overwhelmingly pick the choropleth map as the way to depitct the two nations.

Now, look at these maps from the New York Times (link): 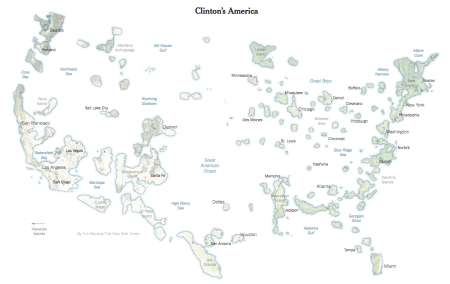 I believe the background is a relief map. Would like to see one where the color is based on the strength of support for Democrats or Republicans.

The pair of maps is extremely effective at bringing out the story about the splitting of the U.S. population. From a design standpoint, I really like it.

I love, love, love the cute annotations everywhere on the page. I imagine the designer had fun coming up with them. 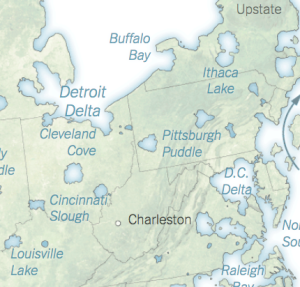 There is an artistic (or data journalistic) license behind the way the data are processed. Most likely, a 50% cutoff is applied to determine which map a county sits atop. The analysis is at the county level so there is neccessarily some simplification... in fact, this aggregation is needed to make the "islands" and other features contiguous.

I am a bit sad that at this moment, we are so focused on what sets us apart, and not what binds us together as a nation.

PS. Via twitter, Maciej reacted negatively to these maps: "Horribly tendentious map visualization from the NYT makes the candidate who won more votes look like a tiny minority."

This is a good illustration of selecting the chart form to bring out one's message. If the goal of the chart is to show that Clinton has more votes, I agree that these maps fail to convey that message.

What I believe the NYT designer wants to point out is that the supporters of Clinton are clustered into these densely populated urban areas, leaving the Republicans with most of the land mass. (Like I said above, because of the 50% cutoff criterion, we are over-simplifying the picture. There are definitely Democrats living somewhere in Trump's nation, and likewise Republicans residing in Clinton strongholds.)

If the NYT design is to "point out ... that the supporters of Clinton are clustered into these densely populated urban areas,"
I think it would be interesting to overlay these maps with cutoff maps that use population density at the county level to separate the country into regions of low- and high-population density. To finding the cutoff, I'd try using a logistic model with binary response "county went for Clinton" and explanatory variable "population density."

I dislike these maps for a different reason.

Thee maps are being put out there to illustrate the “two Americas” story, and many are using them to point out how disconnected the two Americas are.

I live in a 59/37 town, but I see a few Trump signs when I drive around town (and more Trump signs than Hillary signs). But I litterally live right on the border of a 45/52 town, too. Do I really live in a different American than my immediate next door neighbor?

In fact, we are not divided into two distinct Americas, despite the two Americas story. We are divided house to house, often individual to individual. Once you leave state lines behind (which are signficant because of the electoral college and the election of senators by state), there is no practical signficance or enlightenment to be gained by claiming — as these two maps do — that we should view 50.1/49.9 areas are being a different American than 49.9/50.1.

(To say nothing of measurement error and questions about construct definition, perhaps the subject of another comment.)

Are you looking for this? http://www-personal.umich.edu/~mejn/election/2016/