How will the Times show election results next week? Will they give us a cliffhanger?

I don't know for sure how the New York Times will present election results next week; it's going to be as hard to predict as the outcome of the election!

The Times just published a wonderful article describing all the different ways election results have been displayed in the past.

tldr; The designer has to make hard choices. Some graphics are better at one thing but worse at another. If the designer can prioritize the Qs, then the choice will come naturally. This is why the Q corner is at the top of the Trifecta framework (link).

I particularly like the non-map shown right, published in 2000.

This chart doesn't answer every question you want. But it gives a sense of how the candidates built their path to victory.

The imagery of a building works well here. The foundation of a building is its bottom, consisting of states which lean heavily to one party or the other. These foundational blocks scale with either the skew of the support or the number of electoral votes. The lower down in the building, the more solid is the bloc, which makes a lot of sense.

It's not easy to learn the exact vote totals for each state but the vertical axis is pure Tufte and sufficient for most readers.

All in all, this graphic is top-notch. It takes a little time to perfect but not too much. It has clear takeaways and I feel like I learned much more from this chart than I could in a "purple map" type of rendition.

There is a little room for augmentation. It's how they handled the "undecided" states. For me, that is the suspense of this graphic. It's the cliffhanger.

Staring at the chart for the first time, I find that it doesn't address the question of the night: who won? Neither of the "buildings" hit the 270 level required to win the election. Also, there isn't a current vote count so readers have to figure out how many votes are required to win. That's frustrating.

There is an annotation in the middle right, explaining that three states with 37 votes have not yet issued results. That text is better placed near the peaks of the buildings next to the gap where the undecided states would eventually show up.

Also, it is interesting to expand the graphic a bit to address the question of who's likely to win and how. With three states remaining that can go either way, there are eight possible scenarios. It turns out that everything comes down to Florida. Whoever wins Florida wins the election. The other two contests don't matter! (Florida has 25 votes, New Mexico 7, Oregon 5. Gore needs 16 more votes, and Bush needs 24.)

Here is one way to present these scenarios. A little bit of hover-over effect will help here, to provide some details of each scenario. 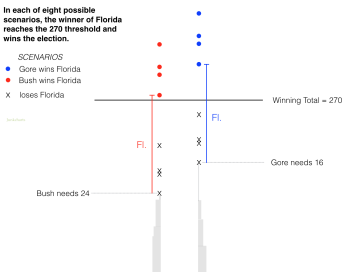 I loved this chart too and set out to try to recreate it in R with ggplot. I ended up getting frustrated and giving up. Anyone else try to recreate or create something similar with more luck?

BtG: I don't think ggplot is the way to go to do this chart. You can do this in base R by constructing it piece by piece. The key function needed is rect.
You have to figure out how to code the data into appropriate vectors to draw each box and fill it in with the right colors.
Also, you have to figure out the plot axes so as to put the boxes in the appropriate places.
Then you use text to add the annotations, and line to add tickmarks.