Junk Charts
Welcome Twitter About Book Blog RSS
How will the Times show election results next week? Will they give us a cliffhanger?
Mapping the two Americas

Here are the cool graphics from the election

There were some very nice graphics work published during the last few days of the U.S. presidential election. Let me tell you why I like the following four charts. 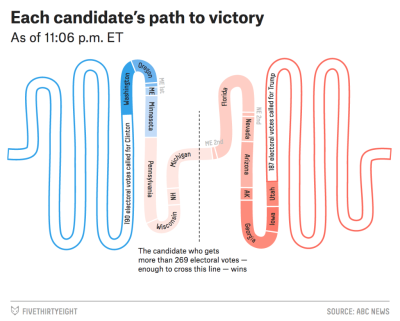 This chart definitely hits the Trifecta. It is narrowly focused on the pivotal questions of election night: which candidate is leading? if current projections hold, which candidate would win? how is the margin of victory?

The chart is symmetric so that the two sides have equal length. One can therefore immediately tell which side is in the lead by looking at the middle. With a little more effort, one can also read from the chart which side has more electoral votes based only on the called states: this would be by comparing the white parts of each snake. (This is made difficult by the top-bottom mirroring. That is an unfortunate design decision - I'd would have preferred to not have the top-bottom reversal.)

The length of each segment maps to the number of electoral votes for the particular state, and the shade of colors reflect the size of the advantage.

In a great illustration of less is more, by aggregating all called states into a single white segment, and not presenting the individual results, the 538 team has delivered a phenomenal chart that is refreshing, informative, and functional.

Compare with a more typical map: 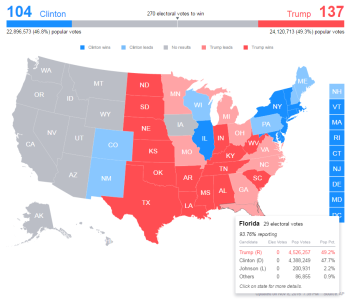 Snakes must be the season's gourmet meat because the New York Times also got inspired by those reptiles by delivering a set of snake charts (link). Here's one illustrating how different demographic segments picked winners in the last four elections. 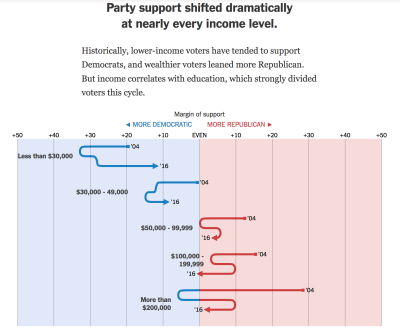 They also made a judicious decision by highlighting the key facts and hiding the secondary ones. Each line connects four points of data but only the beginning and end of each line are labeled, inviting readers to first and foremost compare what happened in 2004 with what happened in 2016. The middle two elections were Obama wins.

This particular chart may prove significant for decades to come. It illustrates that the two parties may be arriving at a cross-over point. The Democrats are driving the lower income classes out of their party while the upper income classes are jumping over to blue.

While the chart's main purpose is to display the changes within each income segment, it does allow readers to address a secondary question. By focusing only on the 2004 endpoints, one can see the almost linear relationship between support and income level. Then focusing on the 2016 endpoints, one can also see an almost linear relationship but this is much steeper, meaning the spread is much narrower compared to the situation in 2004. I don't think this means income matters a lot less - I just think this may be the first step in an ongoing demographic shift.

This chart is both fun and easy to read, packing quite a bit of information into a small space.

The Post prints a map that shows, by county, where the votes were and how the two Parties built their support. (Link to original) 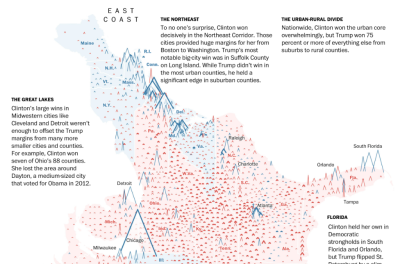 The height represents the number of voters and the width represents the margin of victory. Landslide victories are shown with bolded triangles. In the online version, they chose to turn the map sideways.

This is an entertaining visual that draws you in to explore.

If you want quantitative insights, it's a good idea to check out Andrew Gelman's blog.

This example is a plain statistical graphic but it says something important: 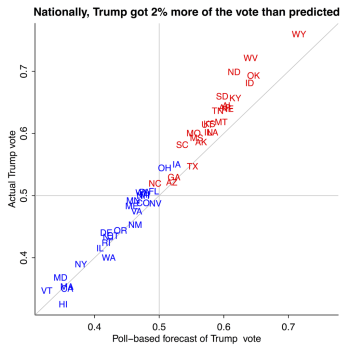 There is a lot of noise about how the polls were all wrong, the entire polling industry will die, etc.

This chart shows that the polls were reasonably accurate about Trump's vote share in most Democratic states. In the Republican states, these polls consistently under-estimated Trump's advantage. You see the line of red states starting to bend away from the diagonal.

If the total error is about 2%, as stated in the caption of the chart, then the average error in the red states must have been about 4%.

This basic chart advances our understanding of what happened on election night, and why the result was considered a "shock."

Recommended reading is Nate Silver's blog post just before the election http://fivethirtyeight.com/features/final-election-update-theres-a-wide-range-of-outcomes-and-most-of-them-come-up-clinton/ Although the headline is misleading, they put the probability of a Clinton win a 71-72% far from a certainty. What he does point out is that undecided/other was high at 12.5% of voters and that could easily lead to a different outcome.

I think polls deserve to die, as the only thing that matters is the election, but that is unlikely. What has made them important to people is their belief that the party that wins is more important than the actual policies.

Ken: Haha, you scooped me on this one. I will be blogging about the election forecasting and I plan on linking to Nate's last article which is required reading.

You find it good practice to overlap labels so its unreadable?. I guess with small adjustments this could be heaps more readable.

KM: I highlighted the scatter plot for being insightful so yes, fixing the overlap would be recommended. The NYTimes and a few outlets subsequently published variations of this chart without the overlapping labels.

Is it possible to have Washington Post's Nation of Peaks link?
Good review. Thank you Kaiser.

Antonio: Sorry for the oversight. The link is here: https://www.washingtonpost.com/graphics/politics/2016-election/election-results-from-coast-to-coast/