Junk Charts
Welcome Twitter About Book Blog RSS
Denver outspends everyone on this
How will the Times show election results next week? Will they give us a cliffhanger?

An example of focusing the chart on a message

Via Jimmy Atkinson on Twitter, I am alerted to this chart from the Wall Street Journal. 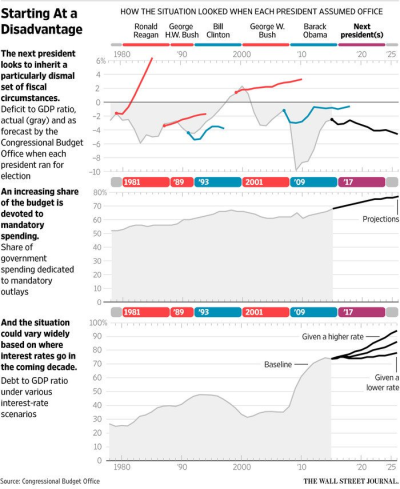 The title of the article is "Fiscal Constraints Await the Next President." The key message is that "the next president looks to inherit a particularly dismal set of fiscal circumstances." Josh Zumbrun, who tipped Jimmy about this chart on Twitter, said that it is worth spending time on.

I like the concept of the chart, which juxtaposes the economic condition that faced each president at inauguration, and how his performance measured against expectation, as represented by CBO predictions.

The top portion of the graphic did require significant time to digest: 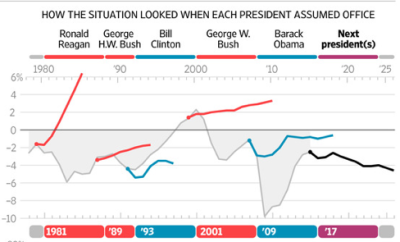 A glance at the sidebar informs me that there are two scenarios being depicted, the CBO projections and the actual deficit-to-GDP ratios. Then I got confused on several fronts.

One can of course blame the reader (me) for mis-reading the chart but I think dataviz faces a "the reader is always right" situation -- although there can be multiple types of readers for a given graphic so maybe it should say "the readers are always right."

I kept lapsing into thinking that the bold lines (in red and blue) are actual values while the gray line/area represents the predictions. That's because in most financial charts, the actual numbers are in the foreground and the predictions act as background reference materials. But in this rendering, it's the opposite.

For a while, a battle was raging in my head. There are a few clues that the bold red/blue lines cannot represent actual values. For one thing, I don't recall Reagan as a surplus miracle worker. Also, some of the time periods overlap, and one assumes that the CBO issued one projection only at a given time. The Obama line also confused me as the headline led me to expect an ugly deficit but the blue line is rather shallow.

Then, I got even more confused by the units on the vertical axis. According to the sidebar, the metric is deficit-to-GDP ratio. The majority of the line live in the negative territory. Does the negative of the negative imply positive? Could the sharp upward turn of the Reagan line indicate massive deficit spending? Or maybe the axis should be relabelled surplus-to-GDP ratio?

As I proceeded to re-create this graphic, I noticed that some of the tick marks are misaligned. There are various inconsistencies related to the start of each projection, the duration of the projection, the matching between the boxes and the lines, etc. So the data in my version is just roughly accurate.

To me, this data provide a primary reference to how presidents perform on the surplus/deficit compared to expectations as established by the CBO projections. 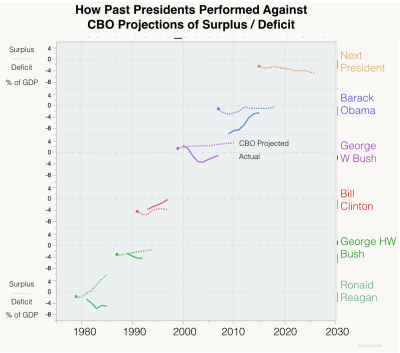 I decided to only plot the actual surplus/deficit ratios for the duration of each president's tenure. The start of each projection line is the year in which the projection is made (as per the original). We can see the huge gap in every case. Either the CBO analysts are very bad at projections, or the presidents didn't do what they promised during the elections.

In your recreation, why have such a freakish y-axis? Each successive president appears higher than the last, but that's just because the y-axis keeps looping. There could be a gap or a hard line at the resets of the axis. Or they could be at the same vertical level, then make it a small multiples design? In any case, I find the recreation much harder to read than the original, although I also found myself swapping the meaning of colored/gray lines in the original.

I have seen a graph for Australia similar to what Adam suggests and it works well.

What these actually show is a major problem with economic forecasting. When there are debt fuelled asset bubbles, growth is strong and deficits decrease. What economists have been doing is projecting that forward, ignoring the problems with increasing levels of debt, so it is all a bit of a surprise to them when it ends. At the moment US asset prices are fairly stable and that is already feeding into the economy, so the assumption is a fairly stable deficit. They will drop and then deficits will be much larger than predicted.

Adam: Good observation. Originally, I did a side-by-side plot. And then I noticed some issues with the data, namely, the projection time window extends beyond the tenure of each president, in both directions. It is possible to do a side-by-side plot if one spends the time to rationalize the time windows first but I decided not to pursue that.

Ken: Sounds like these projections need to have controlling variables.

The actual data take on an interesting perspective when viewed over the longer term, as in this figure from the St. Louis Fed. On inauguration day, Barack Obama inherited the largest Debt-to-GDP ratio (-9.8) since the U.S. was a bit over a year into its participation in World War II (-26.9). It was also bigger than the lowest point in the Great Depression (-5.4).

President Obama has also presided over the largest deficit reduction since WWII (nearly 7.4%; Bill Clinton's reduction was 6.7%). Obviously, nothing beats the post-WWII recovery for vastness and steepness (30.2% in five years).

Kaiser: Yes, it is fairly pointless to talk about the great things that are happening with the deficit while private debt is going out of control. How to correct is a more difficult problem. Probably what is better is to put limits on what reserve banks can do.

Edward: These figures are meaningless when looked at in terms of why they happened. Clinton's was achieved through Greenspan's low interest policies leading to the dotcom bubble. Bush was elected when the crash hadn't completed so came in when the deficit was still low. It was fixed by the low interest rates and the housing bubble. A little bit of luck and the crash would have started after 2008 and he would have looked like an economic genius, which he definitely isn't. Instead Obama looks like it, and he now leaves before the next recession. A look at house prices and the stock market indicate that both are a bubble, and it will end badly for the next president, and nothing either of them can do will stop it. Trump will probably make it worse.

Just a curiosity. How do you get the data for your re-visualization?
Did you find the data right source, or did you interpolate manually the WSJ chart?

Antonio: in this case, I just read off the chart so any mistakes are mine!