Junk Charts
Welcome Twitter About Book Blog RSS
Depicting imbalance, straying from the standard chart
Denver outspends everyone on this

If Clinton and Trump go to dinner, do they sit face to face, or side by side?

One of my students tipped me to an August article in the Economist, published when last the media proclaimed Donald Trump's campaign in deep water. The headline said "Donald Trump's Media Advantage Falters."

Who would have known, judging from the chart that accompanies the article? There is something very confusing about the red line, showing "Trump August 2015 = 1." The data are disaggregated by media channel, and yet the index is hitched to the total of all channels. It is also impossible to figure out how Clinton is doing relative to Trump in each channel.

Here is a small-multiples rendering that highlights the key comparisons:

Alternatively, one can plot the Clinton advantage versus Trump in each channel, like this: 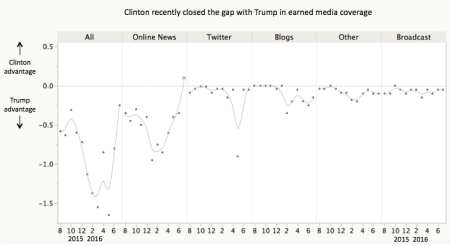 One sees that Clinton has caught up in the last month (July 2016), primarily through more coverage by "online news."

Imagine Mr. Trump and Mrs. Clinton dining at a restaurant. Are they seated side by side (Economist) or face to face (junkcharts)?

The small multiples version is so much easier to interpret than the original. My only complaint is that the x-axis is not as easy to read.

Hi Fabio, yes the x-axis can be improved.