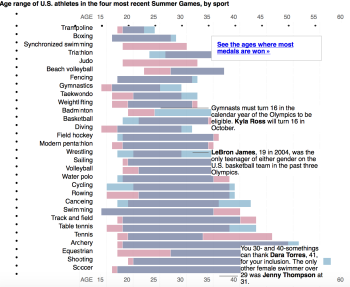 This chart doesn't render properly in Firefox, nor in Safari. But we can see the designer's intention. It has an added dimension of gender.

This wasn't the chart that caught my eye before. The one I saw has the shades of blue that I used - I basically used the same design with a different set of data.

The chart above can be deconstructed in a similar fashion. It represents a set of collapsed histograms - two histograms, one for each gender, on each row. In other words: 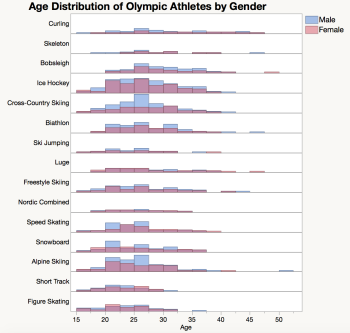 I don't think adding the gender variable adds much to the chart. (Note: the dataset I used did not have gender. I assigned gender randomly for illustrative purposes.)

I have used density plots for this type of display. It may work well with the original display of just sports as they can all be overlaid.