Brexit, Bremain, the world did not end so dataviz people can throw shade and color

Catching a dose of Alberto Cairo the other day. He has a good post about various Brexit/Bremain maps.

The story started with an editor of The Spectator, who went on twitter to make the claim that the map on the right is better than someone else's map on the left: 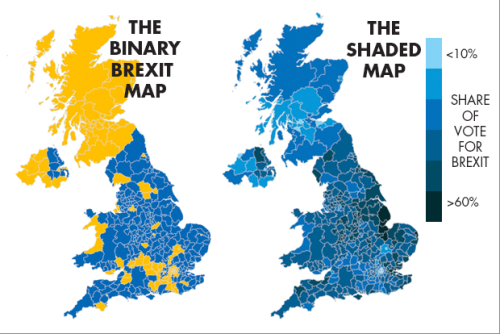 There are two levels at which we should discuss these maps: the scaling of the data, and the mapping of colors.

The raw data are percentages based on counts of voters so the scale is decimal. In general, we discretize the decimal data in order to improve comprehension. Discretizing means we lose granularity. This is often a good thing. The binary map on the left takes the discretization to its logical extreme. Every district is classified as either Brexit (> 50% in favor) or Bremain (> 50% opposed). The map on the right uses six total groups (so three subgroups of Brexit and three subgroups of Bremain.

Then we deal with mapping of numbers to colors. The difference between these two maps is the use of hues versus shades. The binary map uses two hues, which is probably most people's choice since we are representing two poles. The map on the right uses multiple shades of one hue. Alternatively, Alberto favors a "diverging" color scheme in which we use three shades of two hues.

The editor of The Spectator claims that his map is more "true to the data." In my view, his statement applies in these two senses: the higher granularity in the scaling, and also, the fact that there is only one data series ("share of vote for Brexit") and therefore only one color.

The second point relates to polarity of the scale. I wrote about this issue before - related to a satisfaction survey designed (not too well) by SurveyMonkey, one of the major online survey software services. In that case, I suggested that they use a bipolar instead of unipolar scale. I'd rather describe my mood as somewhat dissatisfied instead of a little bit satisfied.

I agree with Alberto here in favor of bipolarity. It's quite natural to underline the Brexit/Bremain divide.

Given what I just said, why complain about the binary map?

We agree with the editor that higher granularity improves comprehension. We just don't agree on how to add graularity. Alberto tells his readers he likes the New York Times version: 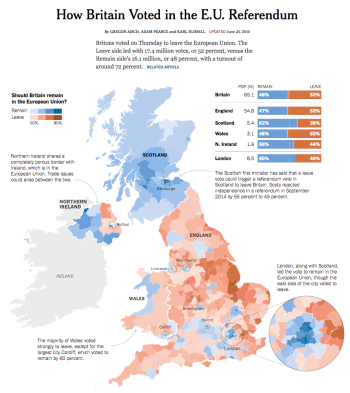 This is substantively the same map as The Spectator's, except for 8 groups instead of 6, and two hues instead of one.

Curiously enough, I gave basically the same advice to the Times regarding their maps showing U.S. Presidential primary results. I noted that their use of two hues with no shades in the Democratic race obscures the fact that none of the Democratic primiaries was a winners-take-all contest. Adding shading based on delegate votes would make the map more "truthful."

That said, I don't believe that the two improvements by the Times are sufficient. Notice that the Brexit referendum is one-person, one-vote. Thus, all of the maps above have a built-in distortion as the sizes of the regions are based on (distorted) map areas, rather than populations. For instance, the area around London is heavily Bremain but appears very small on this map.

The Guardian has a cartogram (again, courtesy of Alberto's post) which addresses this problem. Note that there is a price to pay: the shape of Great Britain is barely recognizable. But the outsized influence of London is properly acknowledged. 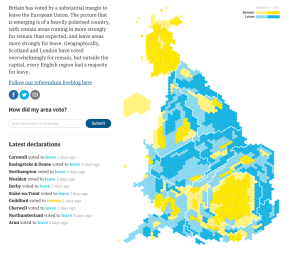 This one has two hues and four shades.  For me, it is most "truthful" because the sizes of the colored regions are properly mapped to the vote proportions.

The cartogram is definitely the most truthful, but you are sacrificing a huge amount of the original purpose by having the shape be barely recognisable, right?

The point of using a map instead of a bar chart is to convey the difference in geographic areas and the Guardian one requires a good knowledge of the map of Britain and even then it's hard to work out whats going on in say, Norfolk or Monmoutshire

Is it possible to convey both by using hue for the proportion and intensity for the population? So you end up with an intense yellow dot for London, a pale blue for most of rural England and Wales, and s very pale yellow for Scotland with more intense cities?

I don't buy this idea that the last map is "barely recognisable". Okay, it isn't what Britain usually looks like on a map, but it's pretty obvious to me that the squeezed bit at the top is Scotland, which has a low population density, And I can see London which is massive, also for obvious reasons.

Absolutely the trade-off is worth it. Imagine a hypothetical nation with two regions. The much larger Region A has one resident who voted remain. The small Region B has 100 residents and 51 voted leave, 49 remain. Leave wins (51-50) but a geographically more accurate map wouldn't suggest that at all. It would suggest that a massive majority voted strongly to remain, while a small minority voted weakly to leave. That kind of map is misleading and tells us nothing.

Any way you present it, the only actual fact that matters is Leave won.

There are many other possible variations. For example to take into account turnout rate and render it as opacity. See map 2 in the following article:
https://medium.com/@jakeybob/brexit-maps-d70caab7315e

Tim: the purpose of showing the data on a map is to display the geographic distribution of the data.

Toward that end, the extreme distortion of geography in the cartogram fails to communicate that information very well.

There are any number of ways to go about showing the impact of population density without making a map that is no longer useful. You could plot data that is already adjusted by population, you could plot a bar chart instead of a map, you could use both a map and a bar chart together, etc.

I find cartograms to be one of the least effective ways of plotting geographic data - you remove the geography! So what's the point? If the geography is no longer encoded on the map, then a map isn't what you're looking for, IMO.