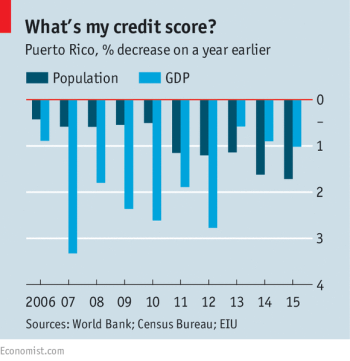 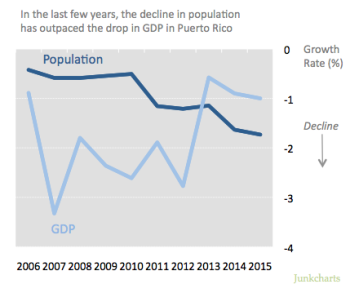 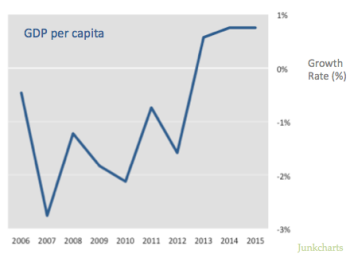 I broadly agree with your points about the original chart not being clear.

However, if the article the chart was attached to was about Puerto Rico's stock of outstanding debt, it actually can make sense to show population and GDP instead of GDP per capita, as total GDP and population would affect how much revenue can be raised.

Michael: actually, if GDP is of interest, both charts are necessary to paint the picture. One gives the insight that the per-capita GDP nominally appears to be improving (I didn't check if these are in real dollars) but that metric paints a misleading picture since the improvement is driven by a decline in population. However, the point of the post is that this chart does not work in the context of the Puerto Rican story at the moment.

While I agree on the importance of showing GDP-per-capita, I have to admit I am not a big fan of using line charts to show values which are derivatives (i.e. growth rates): A line chart always projects a downward or upward "trajectory" in my mind, which in case of derivatives can often confuse. A growth rate with an upward sloping line at least in my mind projects an image of "growing", which is misled of a negative rate is just getting less negative (but the original variable is still shrinking)...