The many-faced area chart is not usually your best choice

I found this chart about the exploding U.S. debt levels in ZeroHedge (link), sourced from Citibank. 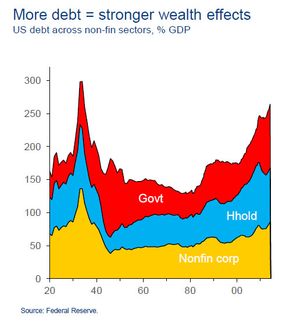 The top line story is pretty easy to see: total debt levels have almost reached the peak of the 1930s. (Ignore that dreadful labeling of the years on the horizontal axis.)

Now, the three colors supposedly carry further insights related to the components of the debt. The problem is it is very hard to figure out which component(s) are responsible for the debt explosion. The choice of the area chart adds to our trouble.

Here are two other area charts that display the same three data series.

Just look at the yellow patch. The left chart gives the wrong impression of steep growth, refuted by the right chart. For the three data series, there are six unique area charts that one can produce!

The following smoothed line chart gives an accurate picture of the relative changes in levels of the debt components: 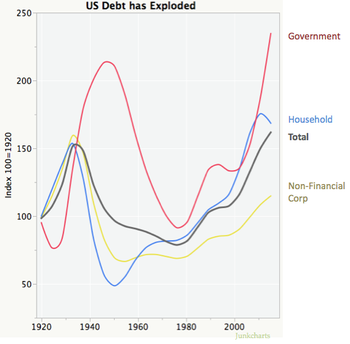 Government debt was the primary driver of the exploding debt both in the 1930s and in the present era. The other debt components also rose but not quite as much. All data series are converted into indices, with 1920 as the reference year.

A scatter plot with connecting lines sometimes produces a more visual portrayal of "home-coming" although in this case, I am not sure the advantage is not clear. 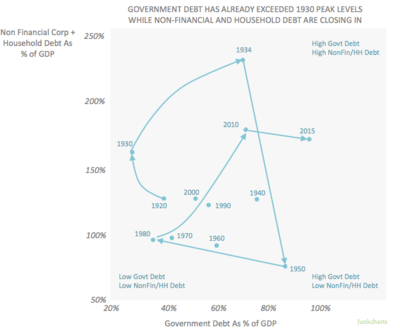 This chart requires more attentive reading. It does make the point that by 2015, the level of government debt has exceeded the previous peak (1950) while the other two debt components are fast reaching the prior peak (1934).

Kaiser - in my experience so far, the 'connected scatter plot' concept really only seems to work if the data is fortuitous enough to present a flow that makes sense, but in most cases just presents a tangled mess.

Meaning, when it "works" as a presentation, it's as much happenstance as anything else - the connected dots make a pleasing pattern, or leave good spacing for annotation, or other things that are unrelated to the actual data or the conclusions to be drawn for them.

Have you written about them before, or do you have any particular thoughts to share on their usefulness?