Via Twitter, Mike W. asked me to comment on this WSJ article about ping pong tables. According to the article, ping pong table sales track venture-capital deal flow: 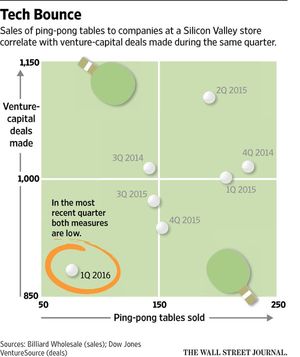 This chart is super-informative. I learned a lot from this chart, including:

Further, the chart proves that one can draw conclusions from a single observation. Here is what the same chart looks like after taking out the 2016 Q1 data point: 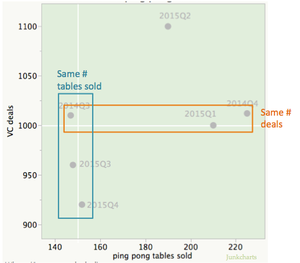 This revised chart is also quite informative. I learned:

The many quotes in the WSJ article also tell us that people in Silicon Valley are no more data-driven than people in other parts of the country.

The sarcasm is strong with this one. :)