Football managers on the hot seat

Chris Y. asked how to read this BBC Sports graphic via Twitter: 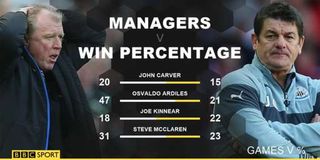 These are managers of British football (i.e. soccer) teams. Listed are some of the worst tenures of some managers. But what do the numbers mean?

The character "V" holds the key. When I first read the chart title, I wonder why managers are opposed to win percentages. Also, the legend at the bottom right confuses me. Did they mean "W" when they printed "V"? "Games W%" seems like a shorthand for winning percentage.

After looking up John Carver's not-so-impressive record, I learned that the left column are total number of matches managed and the right column is the winning percentage expressed as a number between 0 and 100.

I think even the designer got confused by those scales. Witness the little bar charts in the middle: 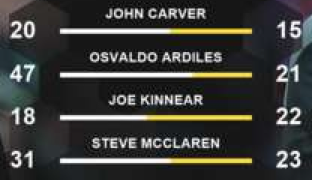 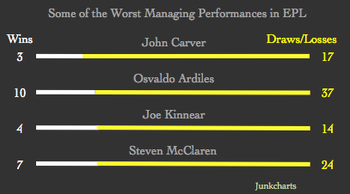 While these managers have compiled similar losing records on a relative basis, some of them lasted longer than others. The following chart brings out the difference in tenure while keeping the winning percentages: (I have re-sorted the managers.) 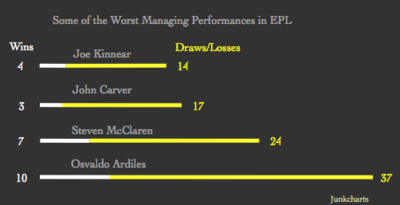 When they finally got the sack, they reached the end of the line.