Junk Charts
Welcome Twitter About Book Blog RSS
A puzzle brought to you by the NY Times
Which way to die, the Bard asked #onelesspie

The state of the art of interactive graphics

Scott Klein's team at Propublica published a worthy news application, called "Hell and High Water" (link) I took some time taking in the experience. It's a project that needs room to breathe.

The setting is Houston Texas, and the subject is what happens when the next big hurricane hits the region. The reference point was Hurricane Ike and Galveston in 2008.

This image shows the depth of flooding at the height of the disaster in 2008. 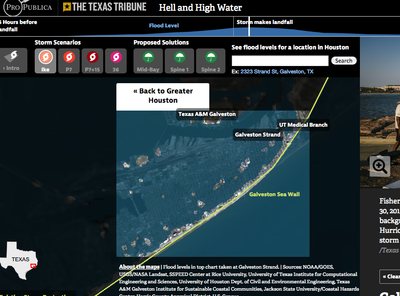 The app takes readers through multiple scenarios. This next image depicts what would happen (according to simulations) if something similar to Ike plus 15 percent stronger winds hits Galveston. 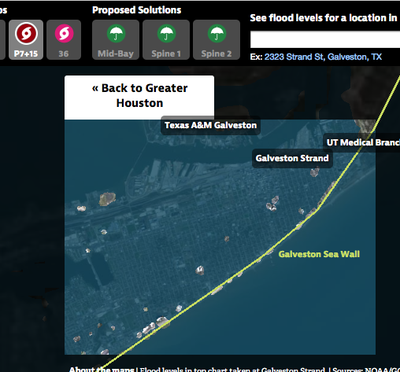 One can also speculate about what might happen if the so-called "Mid Bay" solution is implemented: 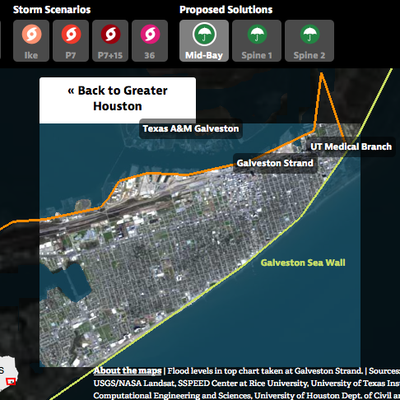 This solution is estimated to cost about $3 billion.

I am drawn to this project because the designers liberally use some things I praised in my summer talk at the Data Meets Viz conference in Germany.

Here is an example of hover-overs used to annotate text. (My mouse is on the words "Nassau Bay" at the bottom of the paragraph. Much of the Bay would be submerged at the height of this scenario.)

The design has a keen awareness of foreground/background issues. The map uses sparse static labels, indicating the most important landmarks. All other labels are hidden unless the reader hovers over specific words in the text.

I think plotting population density would have been more impactful. With the current set of labels, the perspective is focused on business and institutional impact. I think there is a missed opportunity to highlight the human impact. This can be achieved by coding population density into the map colors. I believe the colors on the map currently represent terrain.

This is a successful interactive project. The technical feats are impressive (read more about them here). A lot of research went into the articles; huge amounts of details are included in the maps. A narrative flow was carefully constructed, and the linkage between the text and the graphics is among the best I've seen.