This year's U.S. primary elections have been very entertaining. Delegate maps are a handy way to keep track of the horse race. They provide data to support (or refute) the narratives created by reporters who use words like "landslide", "commanding", etc.

Here’s a delegate map used by the New York Times on the night of Mar 15th when Hillary Clinton won four out of five states, with the fifth (Missouri) being a cliffhanger: 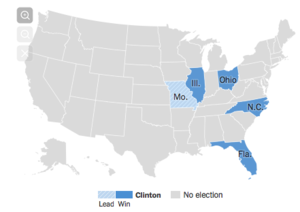 Other media outlets are using pretty much the same form, with different color schemes.

The typical color scheme has two binary levels: one color for each candidate (NYT uses blue for Clinton, green for Sanders in the Democratic race); a lighter shade for who's leading, and a darker shade for the declared winner.

These maps are missing one crucial piece of information, the margin of victory. The margin is important because in most of the contests, the delegates are split proportionally.

The same shade of blue was used to describe the decisive victory in Florida (64% to 33%) and the laser-thin victory in Illinois (51% to 49%). This color scheme implies a winner-takes-all criterion.

Here is a map that includes the margin of victory, computed as the excess number of delegates won in the given state: 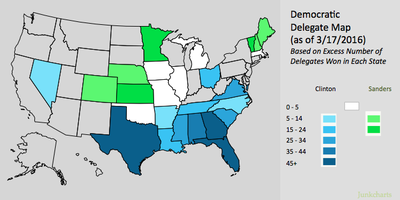 For the Democratic race, the narrative is that Clinton built a sizeable lead in pledged delegates in the Southern states; elsewhere, the states have been evenly split or slightly favoring Sanders (within about 10 delegates). Also, the West and Northwest have largely not spoken yet.

Other maps can be created using different measures of the margin, such as the diference in vote proportions.

I prefer color schemes that reveal the delegate allocation criterion.

I, for one, appreciate election season for it's overall tendency to generate some of the most hilariously bad and some of the most excellent charts we get to see. Trump - he has the best charts. :)

Just to be honest, I'm not a huge fan of either of these examples. The first is too simple to really tell me anything. The second gives me a little cognitive indigestion and I'm not certain that even after thinking through the question it's answering that the return is worth it. Maybe even worse, I think this chart at fivethirtyeight http://projects.fivethirtyeight.com/facebook-primary/ is even more difficult to chew, despite the underlying data being at least interesting in concept. FWIW, if you poke around their election area, I think they did an outstanding job on some of the other charts.

Overall, the "election map" concept is neat, but intellectually I (we, I'd think) know that the underlying drivers have more to do with age, race, income, education level, % urban v. % rural living than geography - so why use a map for this anyhow? Aren't we actually obfuscating the bigger factors by hiding them under a map?

I just very recently got some pretty slick software that, after an analysis that is very geographically sensitive, generates some maps. A lot of whiz bang - but I'm finding that the map fundamentally adds very little to presenting the results and that's even under analytical conditions where the geography heavily factors into the output.

I guess it's possible I'm just mentally blocked on maps in general.