Between teaching two classes, and a seminar, and logging two coast-to-coast flights, I was able to find time to rethink the following chart from the Wall Street Journal: (link to article) 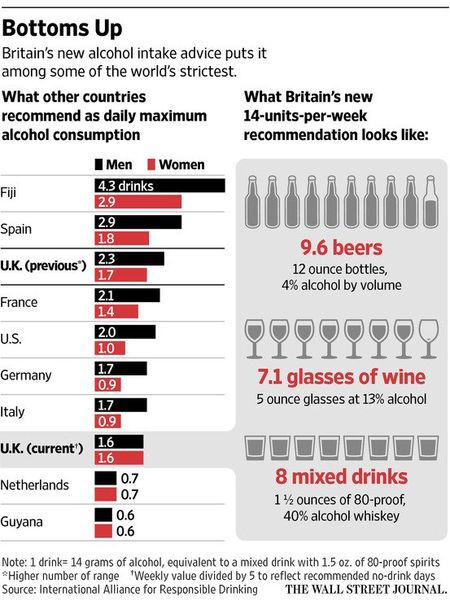 I like the right side of this chart, which helps readers interpret what the alcohol consumption guidelines really mean. When we go out and drink, we order beers, or wine, or drinks - we don't think in terms of grams of alcohol.

The left side is a bit clumsy. The biggest message is that the UK has tightened its guidelines. This message is delivered by having U.K. appear twice in the chart, the only country to repeat. In order to make this clear, the designer highlights the U.K. rows. But the style of highlighting used for the two rows differs, because the current U.K. row has to point to the right side, but not the previous U.K. row. This creates a bit of confusion.

In addition, since the U.K. rows are far apart, figuring out how much the guidelines have changed is more work than desired.

The placement of the bars by gender also doesn't help. A side message is that most countries allow men to drink more than women but the U.K., in revising its guidelines, has followed Netherlands and Guyana in having the same level for both genders. 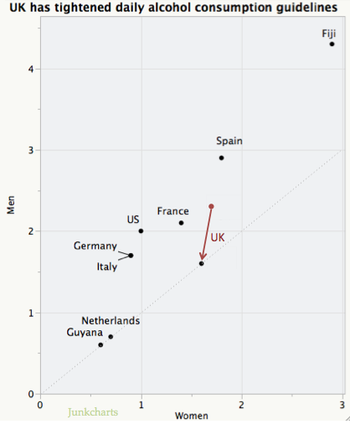 An afterthought: I should have added the words "Stricter", "Laxer" on the two corners of the chart. This chart shows both the U.K. getting stricter but also that it joins Guyana and Netherlands as countries which treat men and women equally when it comes to drinking.

On your scatterplot, the diagonal line is quite helpful.

I heard a discussion of the new guidelines on "More or Less", the excellent BBC4 show on public statistics. Their experts noted that setting guidelines is very tricky.

1. Of course, it's hard to sort out what damage (or slight beneficial effects) occur with alcohol in moderate doses to begin with.

2. But, complicating this, measuring long term effects tends to rely on survey data asking about consumption -- and it's known that reported consumption is much lower than actual consumption. But we don't know where that difference occurs.

For example, we don't know if people in general report 30% less than they actually drink, or whether most people are honest, but heavy drinkers downing a quart of scotch a day report 2 drinks.

The guidelines for drinking seem to be based on reported consumption, so it's likely that you would be safe healthwise drinking a bit more. (but as a man who buys a six pack of beer about every two or three weeks, I'm not personally following that advice).

Even though it'd make the chart taller, I'd suggest using equal distances for the scales for men and women. Squashing the chart vertically de-emphasizes the discrepancy between what is recommended for men and women, which is something you're trying to make more clear with this redesign.

Our wine and spirit measures have been metricated, which at least makes calculating units more straightforward - although in both cases we like standards so much that we've got two of them. So you're looking at (not 7.1 but) either 6.2 or 8.6 glasses of 13% wine, depending on whether you have a large 175 ml glass or a small 125 ml. (Interesting that a large glass comes out as strong as a pint of beer; the folklore was always that a glass of wine was about the strength of *half* a pint. It'd need to be a 125 ml glass of a 9% wine - not unknown, but increasingly unusual.)

As for spirits, it's (not 8 but) either 10 or 14 drinks, based on the large 35 ml or the smaller 25 ml measure (which replaced the old quarter-gill and fifth-gill measures). Or, I suppose, either 5 or 7 doubles - which suggests that a standard US drink is getting on for the size of a British double!

(Not passing any comment on the limits themselves, as this is a charts blog.)

I understand the plot, but I find it requires more thinking and intelligence. The first version isn't great, but I think it's easier to understand for the general public.