A puzzle brought to you by the NY Times

Here is a map that attracted my attention on the NY Times (link): 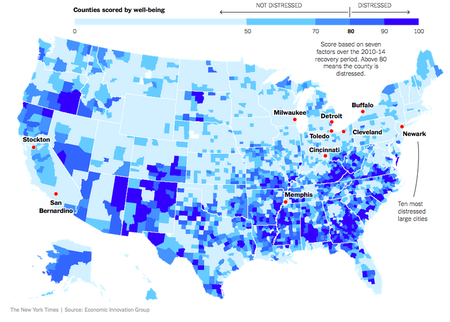 The counties are given shades of blue with darker shades meaning more economic distress. According to the label (Newark), the 10 red dots are the top 10 most distressed large cities in the U.S. It appears that almost all of these cities are in regions of light blue shade. That's the puzzle.

A separate issue with this map is that it presents a static image of distress. The first paragraph of the article states: "As the most prosperous communitiesin the United States have gotten richer since the end of the Great Recession in 2009, economic conditions in many distressed areas have deteriorated even further." It would be great if we can see a before and after 2009 comparison.

Not familiar with this specific data, but a few years ago, the AP had a similar Economic Stress Index based on Unemployment, Bankruptcy, & Foreclosure.

Could it be that these large distressed cities tend to be surrounded by smaller towns that are doing much better, thus lowering the distress level at the county level?

Interesting observation. It appears as if the most distressed areas are relatively rural. Even stressed large cities are doing better than their country cousins. Would be interesting to do an overlay of urban counties/SMSAs.

Interesting indeed. And maybe the reason is not economic distress, maybe the economic factors measured in this analysis are strongly influenced by other "non-economical" factors like violence/ shooting.