Happy new year. Did you have a white Christmas?

I spent time with the family in California, wiping out any chance of a white Christmas, although I hear that the probability would have been miniscule even had I stayed.

I did come across a graphic that tried to drive the point home, via NOAA. 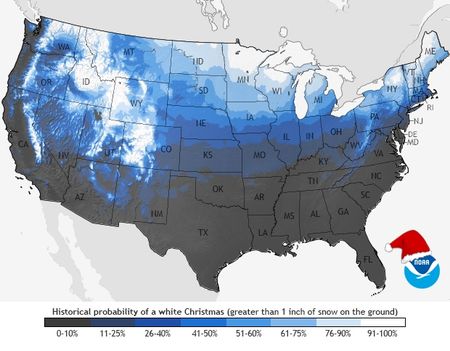 Unfortunately, this reminded me a little of the controversial Florida gun-deaths chart (see here): In this graphic, the designer played with the up-is-bigger convention, drawing some loud dissent.

Begin with the question addressed by the NOAA graphic: which parts of the country has the highest likelihood of having a white Christmas? My first instinct is to look at the darkest regions, which ironically match the places with the smallest chance of snow.

Surely, the designer's idea is to play with white Christmas. But I am not liking the result.

Then, I happen upon an older version (2012) of this map, also done by NOAA. (See this Washington Post blog for example.) 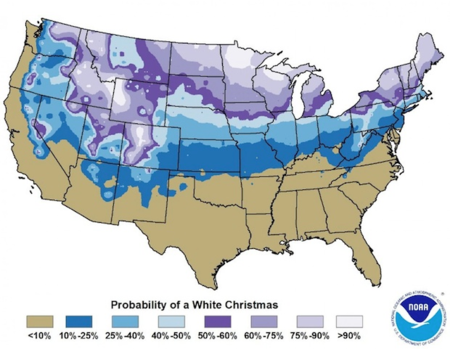 There are a number of design choices that make this version more effective.

The use of an unrelated brown color to cordon off the bottom category (0-10%) is a great idea.

Similarly, the play of hue and shade allows readers to see the data at multiple levels, first at the top level of more likely, less likely, and not likely, and then at the more detailed level of 10 categories.

Finally, there is no whiteness inside the US boundary. The top category is the lightest shade of purple, not exactly white. In the 2015 version above, the white of the snowy regions is not differentiated from the white of the Great Lakes.

I am still not convinced about the inversion of the darker-is-larger convention though. How about you?

I think the first NOAA map is pretty clear - but it is a good point about the confounding of white for the lakes with white for data. An easy fix to that would be not show Canada/Mexico and have the background be black.

These maps are tough to distinguish the different levels I agree - but the overall patterns are pretty clear. The second I would say if it were smoothed more would make the contours easier to follow - but if you did that in the first map you would miss some of the local details like the ridge along the Appalachian mountains.

So if the point is local look up, then a second tool to look up the exact estimate at your location (with an estimated error) would be a good addition.

I think you are wrong about there being no white in the second map. For example in Wisconsin I can see 5 contour levels, with the last being the final white bin. It is a generally good point though, in that it is hard to distinguish more levels. And the less smooth the map the more likely to get confused.

I don't see the alleged "inversion" here as an issue at all.

I don't believe that "darker is bigger" is a set standard in the way that "up is bigger" is, by a long stretch. There is a great deal of variation in how such scales are implemented.

I found 2015 version to be abundantly clear and obvious in the meaning of white/blue and the meaning of grey, and I have a hard time seeing how it could be confused, honestly.

I agree that they could have chosen a better color than the dark grey, for additional clarity, and obviously the white should not have been used for the lakes or any other elements.

jlbriggs: Do an image search on Google for "choropleth". Darker is bigger is dominant. The only reason why this map inverts that is because of the snow metaphor.

andy: if you look at the legend, the rightmost color is not really white; it carries the slightest hint of purple.

The fetish for local detail is a topic for a different post. I am not convinced that smooth color transition enhances, rather than decreases, understanding.

Much prefer the first map, with the exceptions as already noted. Whiter is, well, whiter, to me, so I have no trouble with that at all.

My problem with the second map is the light blue to dark purple transition. I would be constantly trying to figure out whether dark purple had more snow or less snow without always referring to the legend. Should be easier than that.

@Kaiser - I am aware that many are indeed set up that way.

But most weather maps are not - the example you posted as better, for instance, is not.

My point is simply that there is more latitude in this regard than there is for the "up is bigger" example.

I wholeheartedly agree with the other commenters: other than the slightly confusing treatment of the lakes (which could just be made grey), I much prefer the 2015 map and see no problem at all with the claimed inversion.