Scorched by the heat in Arizona

Reader Jeffrey S. saw this graphic inside a Dec 2 tweet from the National Weather Service (NWS) in Phoenix, Arizona. 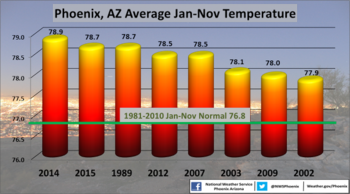 In a Trifecta checkup (link), I'd classify this as Type QV.

The problems with the visual design are numerous and legendary. The column chart where the heights of the columns are not proportional to the data. The unnecessary 3D effect. The lack of self-sufficiency (link). The distracting gridlines. The confusion of year labels that do not increment from left to right.

The more hidden but more serious issue with this chart is the framing of the question. The main message of the original chart is that the last two years have been the hottest two years in a long time. But it is difficult for readers to know if the differences of less than one degree from the first to the last column are meaningful since we are not shown the variability of the time series.

The green line makes an assertion that 1981 to 2010 represents the "normal". It is unclear why that period is normal and the years from 2011-5 are abnormal. Maybe they are using the word normal in a purely technical way to mean "average." If true, it is better to just say average. 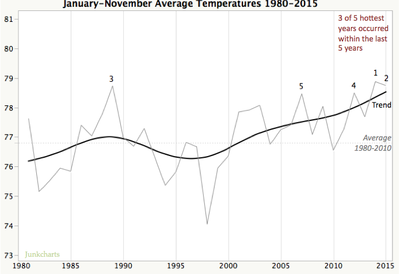