My friend Alberto Cairo said it best: if you see bullshit, say "bullshit!"

He was very incensed by this egregious "infographic": (link to his post) 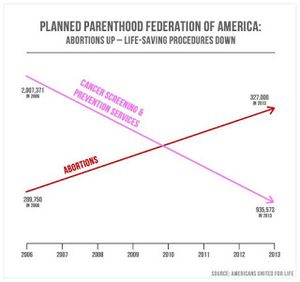 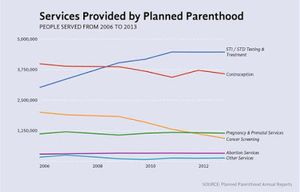 The new version provides a much richer story of how Planned Parenthood has shifted priorities over the last few years.

It also exposed what the AUL (American United for Life) organization distorted the story.

The designer extracted only two of the lines, thus readers do not see that the category of services that has really replaced the loss of cancer screening was STI/STD testing and treatment. This is a bit ironic given the other story that has circulated this week - the big jump in STD among Americans (link).

Then, the designer placed the two lines on dual axes, which is a dead giveaway that something awful lies beneath.

Further, this designer dumped the data from intervening years, and drew a straight line from the first to the last year. The straight arrow misleads by pretending that there has been a linear trend, and that it would go on forever.

But the masterstroke is in the treatment of the axes. Let's look at the axes, one at a time:

The horizontal axis: Let me recap. The designer dumped all but the starting and ending years, and drew a straight line between the endpoints. While the data are no longer there, the axis labels are retained. So, our attention is drawn to an area of the chart that is void of data.

The vertical axes: Let me recap. The designer has two series of data with the same units (number of people served) and decided to plot each series on a different scale with dual axes. But readers are not supposed to notice the scales, so they do not show up on the chart.

To summarize, where there are no data, we have a set of functionless labels; where labels are needed to differentiate the scales, we have no axes.

This is a tried-and-true tactic employed by propagandists. The egregious chart brings back some bad memories.

Here is Thomas Friedman's use of the same trick.

Plus there may be changes other than the Affordable Care Act and population changes. If there are more women with valid reasons for abortions then there should be more abortions. Time confounding is always a problem.