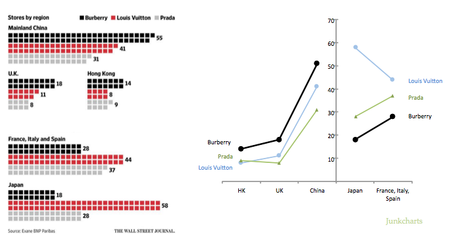 To me, line charts suggest changes over time.

Cool charts, did you make them with Office software or creately diagram software ?

After all these years...I still cannot get behind your use of line charts for categorical data in this manner.

A dot plot seems a much better idea.

At the same time, the problem with the original is the weird variation of a bar chart that they chose, and the fact that they removed on category from the base line.

A simple, well designed grouped bar or column chart would work just fine for this display, without confusing the user by adding a line between data points.

Quick and dirty example as a normal column chart from Excel:

Shalin: that is made in Excel, with post-processing in Powerpoint. I like to tell people if you spend enough time in Excel/Powerpoint, you can make presentable graphics. It's not the most natural way of doing it but it is possible.

jlbriggs, lemmus^2, and others: let me explain my logic yet again, just for the sake of newer readers. When you read a grouped column chart like the one jlbriggs made (thank you!), your eyes are moving from the top of one column to the next, and the trajectory of your eyes is the line in the line chart. One side benefit of using the line chart is that it forces the designer to think carefully about ordering of the categories.

For me too, it's pretty strange to see categorical data displayed like the example above as a line chart. Really counterintuitive. However, I have as well to admit that it is indeed much easier to read (and looks more calm, smooth) when the line-chart is displayed directly vis-à-vis the above linked bar chart.