When in Seattle, don't look for the bus map

The past week in Seattle, I was blessed with amazing weather. The city has great coffee and restaurants, so pleased me alright.

But Seattle-ites, please tell your government to burn your transit map presto!  I tried looking at the map three or four times, and each time, my eyes were burning so much from the colors, the details, the lack of labels, the general confusion that I gave up. Yes, that's the worst thing an information graphics designer wants to hear - the reader waves the white flag. 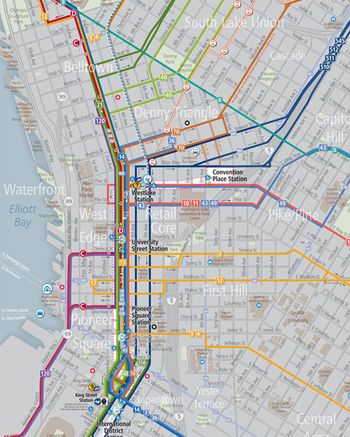 How do you make sense of that? In the excerpt below, I labeled with black boxes my desired origin and destination. 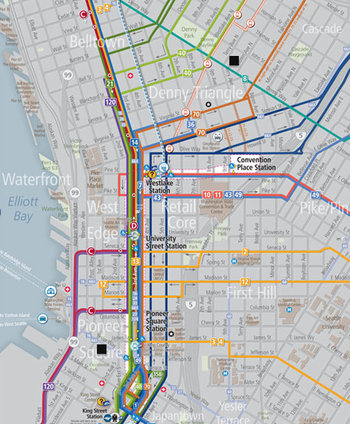 There are many obstacles to figuring out a route. Firstly, the precise locations of bus stops are not indicated on the map. From the black box up top, if I wanted to catch a bus, I wasn't even sure which corner to go to! Seattle, by the way, is full of one-way streets. Eventually, you realize that different lines have different operators, and they don't use a common ticket.

I ended up at the Westlake Station wanting to take public transit to the International District. I purchased a ticket from the machine. Then I boarded a bus seemingly heading in the right direction. The bus driver stared me down as if I just stepped into disputed territory. She told me my ticket was for a train. I asked her how I'd catch a train. Her eyes told me to get off quickly or else...

I too thought I bought a train ticket but it turns out the train and buses share the same platform.

Back to the map, it would appear that the green line labeled 40 would be useful to me. I tried to trace the green line but it started looping around and I gave up.

I generally buy all day tickets so it avoids one problem, but with multiple operators that wouldn't work. The way I think of it is that holidays are costing me hundreds of dollars a day, so I don't want to spend half an hour sorting out transport, and any city that wants tourists should realise that is something people want.

We Seattelites should burn down our public transit and rebuild it from scratch while we're at it. I've traveled a lot and nothing makes me feel like my hometown is more provincial then seeing the cheap and functional and easy to navigate subway/bus systems that so many other cities have... San Francisco, London, Rome, Seoul, even Athens! All have more functional transit than we do.