Junk Charts
Welcome Twitter About Book Blog RSS
When in Seattle, don't look for the bus map
A not-so-satisfying rose

I found this chart on a Munich publication called Süddeutsche Zeitung. This appeared during the most recent Greek/Euro crisis. 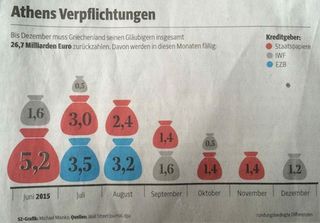 The bags of money were financial obligations that were coming due from June 2015 to December 2015. There were three creditors, indicated by red, blue and gray.

This graphic answers one question well: individual debt obligations for a given month and given creditor. However, by privileging these details, the chart fails to convey cumulative totals well - readers have to make calculations in their heads.

In the revision, I wanted to convey two key messages: the total amount of debt that was coming due in those seven months, and the relative proportion of debt owed to the three creditors. An area chart brings this out better. 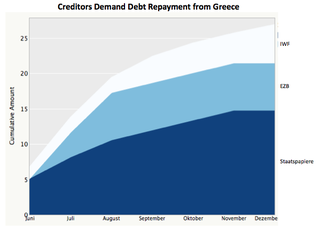 Conversely, it is much harder to figure out individual debt obligations by month and creditor from this version.

This points to the importance of determining your key message(s) before choosing a form.

It also highlights why trying to show everything with a single chart often fails.

For me, four charts summarize this data nicely.
Example here:

I disagree. The chart is supposed to show the obligations per month, since these were in the focus of political attention: Will Greece be able to come up with enough cash month after month? This is represented well by the chosen graph. Your version conveys a different message. Fair enough but that doesn't make it better.