Junk Charts
Welcome Twitter About Book Blog RSS
Taking care of a German pie chart while enjoying German kuchen
Would you be willing to miss a train to admire art?

Surveys generate a lot of data. And, if you have used a survey vendor, you know they generate a ton of charts.

I was in Germany  to attend the Data Meets Viz workshop organized by Antony Unwin. Paul and Sascha from Zeit Online presented some of their work at the German publication, and I was highly impressed by this effort to visualize survey results. (I hope the link works for you. I found that the "scroll" fails on some platforms.)

The survey questions attempted to assess the gap between West and East Germans 25 years after reunification.

The best feature of this presentation is the maintenance of one chart form throughout. This is the general format: 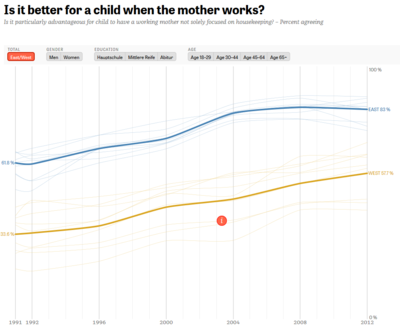 All the other lines in the background indicate different subgroups of interest. These subgroups are accessible via the tabs on top. They include gender, education level, and age.

The little red "i" conceals some text explaining the insight from this chart.

Hovering over the "Men" tab leads to the following visual: 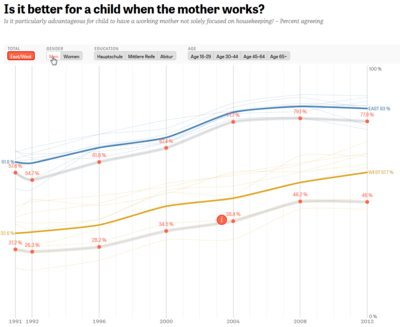 Both lines for men sit under the respective average but the shape is roughly the same. (Clicking on the tab highlights the two lines for men while moving the aggregate lines to the background.)

The Zeit team really does an amazing job keeping this chart clean while still answering a variety of questions.

They did make an important choice: not to put every number on this chart. We don't see the percent disagreeing or those who are ambivalent or chose not to answer the question.

Like I said before, what makes this set of charts is the seamless transitions between one question and the next. Every question is given the same graphical treatment. This eliminates learning time going from one chart to the next.

Here is one using a Likert scale, and accordingly, the vertical axis goes from 1 to 7. They plotted the average score within each subgroup and the overall average: 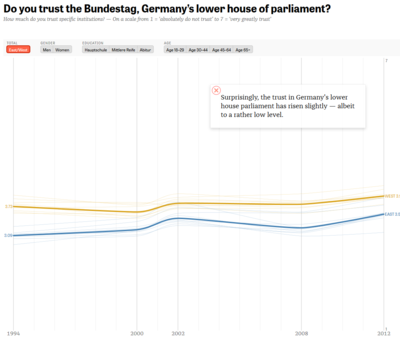 Here is one where they combined the top categories into a "Bottom 2 Box" type metric: 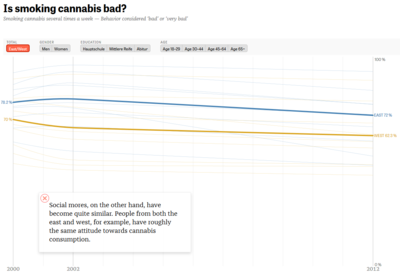 Finally, I appreciate the nice touch of adding tooltips to the series of dots used to aid navigation.

The theme of the workshop was interactive graphics. This effort by the Zeit team is one of the best I have seen. Market researchers take note!

I have to say, though, I dislike this tendency to put all text in Tuftean light grey. That's a choice that originally made sense for ink on paper. It works less well on a screen, where I simply can't read the text at all.

I like the smooth transitions and consistently shown in the data, I wonder how well this chart would project on a large screen. I agree with Derek, the gray is tough to follow, particularly at the size shown, but in projection it may get better but probably worse. We are always looking for ways to make our graphs or charts better for our science talks, your thoughts on consistency are a great start to designing these talks. Thanks.