Incomprehensible, and even insidious

A reader Alex V. nominated this chart as one of the most incomprehensible ever: 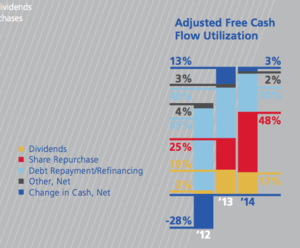 This comes from the Annual Report 2014 of Allison Transmission.

I applaud the fact that they obviously spent time making the charts. This is not something that comes straight out of Excel.

And someone really tried here--but you'd hope someone else came to the rescue and let them know this is impossible to understand.

The use of leader lines to point to the actual data doesn't work, not least because there are only two margins to fit three lists of numbers. It's like the two little kids being forced to share one seat on the left margin.

The rightmost column adds to 100%. The largest three sections appear to say Allison used cash to pay dividends, to buy back share and to repay debt. The three uses accounted for almost 95% of the positive change in cash (really not sure what the base is of these percentages). The gap of 5% is split into two parts which are explained by labels that are quite uninformative ("Other, net", "Change in cash, Net").

Even this interpretation is flawed because the blue section is net change in cash, which presumably was positive in 2014 (and 2013). However, dividends, share repurchase and debt repayment all cause a negative shift in cash so how could they point in the same direction as a positive net change in cash?

Things fall apart if I apply this interpretation to 2012. The -28% blue section seems to indicate that Allison had a cash deficit that year. This is weird because that would imply cash increased 100% exactly in 2013 and in 2014.

Further, someone is trying to hide bad news. Compare the -28% section in blue for 2012 and the 25% section in red for 2013. The blue section is slightly smaller than it should be. Part of the trick is to draw the horizontal axis in the same blue as the blue block. The top edge of the blue block is really not part of the block!

***
Now you might argue that the distortion is so small it could be accidental. But then this happens again on a different chart on the same page: 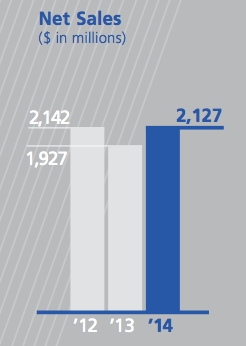 This is a reproduction of the first chart, using a line chart: 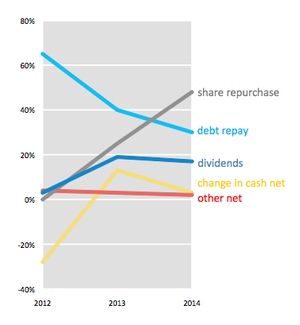 It doesn't present the relationship between the five statistics, which I'm not clear about, but at least in this version, you can see the trends.

The reproduction doesn't Look right. Did you mix up the dividend and net change numbers in 2012?

Jim: Thanks for the note. Yes, it looks like somewhere during the process, I flipped the order of the labels so they are all incorrect except for the middle one. I have uploaded the corrected version.

I was going to say that I think the percentages on the original chart are percent of gross income. But now that I look again, that doesn't make sense, otherwise the first year they should have had 28% positive net change in cash. What's odd is that even the first year totals to 100% if you flip the sign on the 28%.