I try hard to not hate all hover-overs. Here is one I love

One of the smart things Noah (at WNYC) showed to my class was his NFL fan map, based on Facebook data.

This is the "home" of the visualization: The fun starts by clicking around. Here are the Green Bay fans on Facebook: 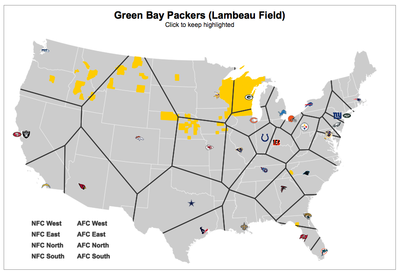 Also, you can see these fans relative to other teams in the same division: 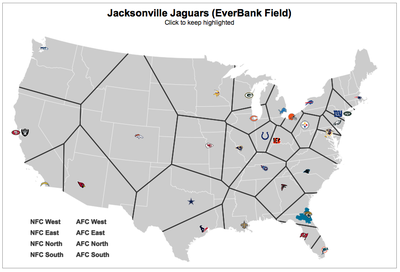 What makes this visualization work?

Notice the "home" image and those straight black lines. They are the "natural" regions of influence, if you assume that all fans root for the team that they are physcially closest to.

To appreciate this, you have to look at a more generic NFL fan map (this is one from Deadspin): 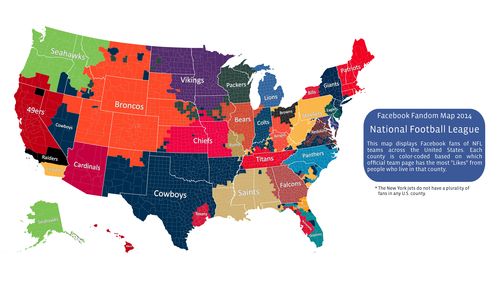 When looking at the fan map, the most important question you have is what is each team's region of influence. This work reminds me of what I wrote before about the Beer Map (link). Putting all beer labels (or NFL teams) onto the same map makes it hard to get quick answers to that question. A small-multiples presentation is more direct, as the reader can see the brands/teams one at a time.

Here, Noah makes use of interactivity to present these small multiples on the same surface. It's harder to compare multiple teams but that is a secondary question. He does have two additions in case readers want to compare multiple teams. If you click instead of mousing over a team, the team's area of influence sticks around. Also, he created tabs so you can compare teams within each division.

I usually hate hover-over effects. They often hide things that readers want (creating what Noah calls "scavenger hunts"). The hover-over effect is used masterfully here to organize the reader's consumption of the data.

Moving to the D corner of the Trifecta checkup. Here is Noah's comment on the data:

Facebook likes are far from a perfect method for measuring NFL fandom. In sparsely-populated areas of the country, counties are likely to have a very small sample size. People who like things on Facebook are also not a perfect cross-section of football fans (they probably skew younger, for example). Other data sources that could be used as proxies for fan interest (but are subject to their own biases) are things like: home game attendance, merchandise sales, TV ratings, or volume of tweets about a team.

Interesting thing about the Cowboys is how they capture areas that are on a boundary between two or more closer teams.