Junk Charts
Welcome Twitter About Book Blog RSS
But or because more information
How to tell if your graphic is underpowered?

Shaking up expectations for pension benefits

Ted Ballachine wrote me about his website Pension360 pointing me to a recent attempt at visualizing pension benefits in various retirement systems in the state of Illinois. The link to the blog post is here.

One of the things they did right is to start with an extended guide to reading the chart. This type of thing should be done more often. Here is the top part of this section. 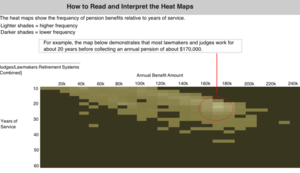 It turns out that the reading guide is vital for this visualization! The reason is that they made some decisions that shake up our expectations.

Similarly, a person's service increases as you go down the vertical axis, not up.

I have recommended that they switch those since there doesn't seem to be a strong reason to change those conventions.

This display facilitates comparing the structure of different retirement systems. For example, I have placed next to each other the images for the Illinois Teacher's Retirement System (blue), and the Chicago Teacher's Pension Fund (black). 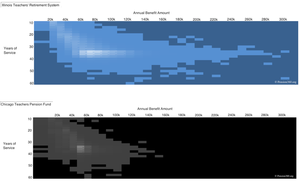 It is immediately clear that the Chicago system is miserly. The light gray parts extend only to half of the width compared to the blue cells in the top chart. The fact that the annual payout grows somewhat linearly as the years of service increase makes sense.

What doesn't make sense to me, in the blue chart, is the extreme variance in the annual payout for the beneficiary with "average" tenure of about 35 years. If you look at all of the charts, there are several examples of retirement systems in which employees with similar tenure have payouts that differ by an order of magnitude. Can someone explain that?

One consideration for those who make heatmaps using conditional formatting in Excel.

These charts code the count of people in the shades of colors. The reference population is the entire table. This is actually not the only way to code the data. This way of coding it prevents us from understanding the "sparsely populated" regions of the heatmap.

Look at any of the pension charts. Darkness reigns at the bottom of each one, in the rows for people with 50 or 60 years of service. This is because there are few such employees (relative to the total population). An alternative is to color code each row separately. Then you have surfaced the distribution of benefits within each tenure group. (The trade-off is the revised chart no longer tells the reader how service years are distributed.)

Excel's conditional formatting procedure is terrible. It does not remember how you code the colors. It is almost guaranteed that the next time you go back and look at your heatmap, you can't recall whether you did this row by row, column by column, or the entire table at once. And if you coded it cell by cell, my condolences.

"What doesn't make sense to me, in the blue chart, is the extreme variance in the annual payout for the beneficiary with "average" tenure of about 35 years. If you look at all of the charts, there are several examples of retirement systems in which employees with similar tenure have payouts that differ by an order of magnitude. Can someone explain that?"

I can only guess that 35 years is about how long it takes to get promoted as far as possible in the system, and so this is where the range is maximized.

I would also switch x and y axes.

The peak at 35 years service would correspond to late fifties, early sixties, at which point if someone has enough pension they retire. If I could get $200,000+/year I would retire now. Those that stay on are staying on purely because they don't get enough to retire.