Nice chart from the neck down

I was drawn to this Wall Street Journal chart because of the blue columns. 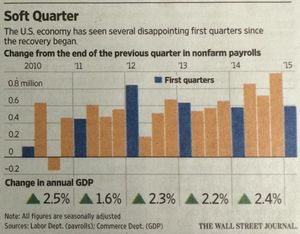 The blue color solves a common problem in time-series plots when the time axis is incomplete. The first quarter of 2015 is dangling. The article is about first-quarter economic performance and so it is appropriate to focus attention on the Q1 columns.

The rest of the chart is filled with Tufte goodies: the clean axes and labels and so on. 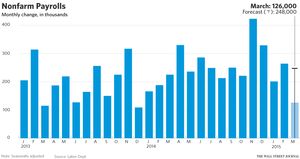 This one singles out the last column for attention. Readers are invited to compare the most recent month with any of the other months displayed on the chart. By contrast, in the printed version, readers are guided to compare first-quarters across years. The choice of colors leads readers in different directions.

Another difference between the two charts is portrayal of missed expectation in the online version. (I am ignoring the vertical line on top of the T, which is just confusing and unnecessary.) This seems to be the main story in the chart. If so, I'd like to see the forecast data displayed for several other months. By doing so, they drive home the message that this most recent month is uniquely bad.

The footnote is actually very important (I'd place it in a more visible spot). It is because of seasonal adjustment that readers can compare the heights of any column to any column on these two charts. If the data were not adjusted, then it would be difficult to separate the trend from seasonality. For a refresher on seasonal adjustment, see my post here, and the chapters on economic statistics in Numbersense (link).

The printed edition above is a great chart from the neck down. The headline of the chart lets it down. "The U.S. economy has seen several disappointing first quarters since the recovery began."

The blue columns do not stand out as particularly bad, especially if one considers that there should be a margin of error around each number in the chart.

The column chart is purely about "nonfarm payrolls" which is only one aspect of the U.S. economy. The other data series, GDP, tucked below the column chart, show a set of positive annual numbers which do not fit the headline either.