Junk Charts
Welcome Twitter About Book Blog RSS
Where a scatter plot fails
Light entertainment: a pie from the sky

Three axes or none

Catching up on some older submissions. Reader Nicholas S. saw this mind-boggling chart about Chris Nolan movies when Interstellar came out: 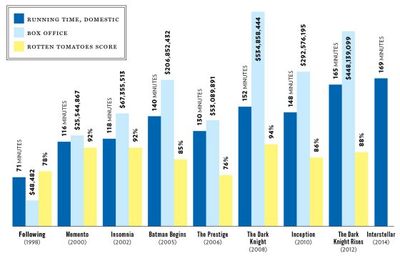 This chart was part of an article by Vulture (link).

It may be the first time I see not one, not two, but three different scales on the same chart.

First we have Rotten Tomatoes score for each movie in proportions: 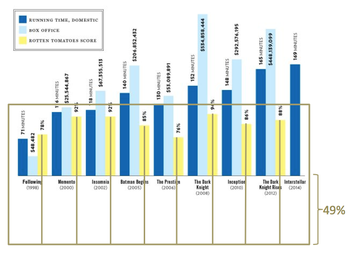 The designer chopped off 49% of each column. So the heights of the columns are not proportional to the data.

Next we see the running time of movies in minutes (dark blue columns): 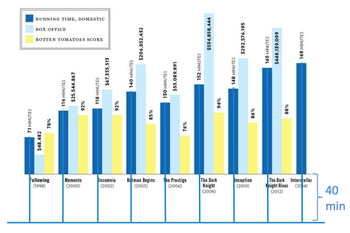 For this series, the designer hid 40 minutes worth of each movie below the axis. So again, the heights of the columns do not convey the relative lengths of the movies. 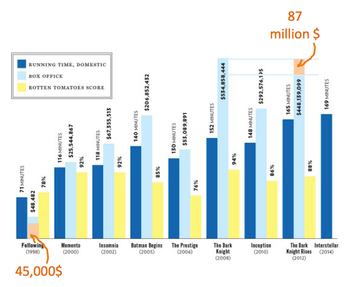 Or maybe not. I can't figure out what is the scale used here. The same-size chunks shown above display $45,000 in one case, and $87 million in another!

So the designer kneaded together three flawed axes. Or perhaps the designer just banished the idea of an axis. But this experiment floundered.

Here is the data in three separate line charts: 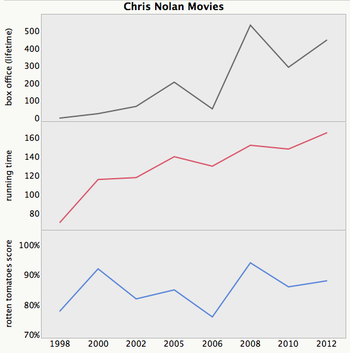 In a Trifecta Checkup (link), the Vulture chart falls into Type DV. The question might be the relationship between running time and box office, and between Rotten Tomatoes Score and box office. These are very difficult to answer.

The box office number here refers to the lifetime gross ticket receipts from theaters. The movie industry insists on publishing these unadjusted numbers, which are completely useless. At the minimum, these numbers should be adjusted for inflation (ticket prices) and for population growth, if we are to use them to measure commercial success.

The box office number is also suspect because it ignores streaming, digital, syndication, and other forms of revenues. This is a problem because we are comparing movies across time.

PS. [12/15/2014] I will have a related discussion on the statistics behind this data on my sister blog. Link will be active Monday afternoon.