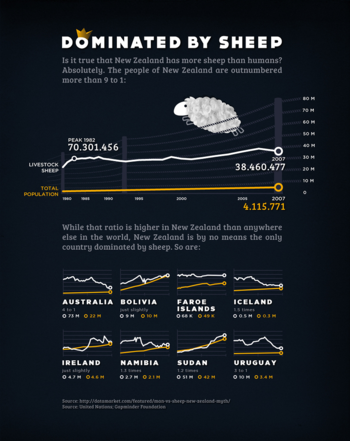 I have yet to understand why the vertical axis of the top chart keeps changing scales over time. The white dot labelled "Peak 1982" (70 million) is barely above the other white dot for "2007" (38 million). This chart hides a clear trend: the population of sheep in New Zealand has plunged by 45% over 25 years.

To address the question of sheep versus human, one should plot the ratio of sheep-to-human directly. In this case, the designer probably faced a problem: because of the plunging population of sheep, the ratio has plunged steeply in 25 years. To make a point that "people are outnumbered more than 9 to 1", the designer didn't want to show a plunging trend. (Could this be the reason why the human population in 1982 was not printed?)

This is a case of too many details. Instead of manipulating the scale to distort the data, one can simply show the current ratio, or the average ratio in the last five years.

As the reader scans to the bottom set of charts, a cognitive wedge is encountered, as the curved scale of the New Zealand chart gave way to the normal uniform scale. These smaller charts are no less confusing, however. 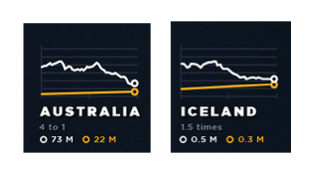 Again, I'm not convivned that the time series adds anything to the message.

Definitely nonsensical vertical axes here. I think the main NZ graph is purely intended to be the graphical equivalent of a pun; the horizontal lines creating a perspective illusion of a common farm fence you would find in Australia or New Zealand, with the sheep jumping over (though the real deal has many fewer wires). The smaller ones are equally silly; I think they are merely trying to fit the graphed lines aesthetically into the space without regard to the vertical scale.

I agree wit stephen. It appears to be a case of form at the sacrifice of function.

I find it funny that Bolivia is still dominated by sheep even though there are more humans. It's probably just a typo in the numbers below the plot.

What does the "K" in Faroe Islands mean?