This NYT graphic published on the eve of the Senate elections represents the best of data visualization: it carries its message with a punch. 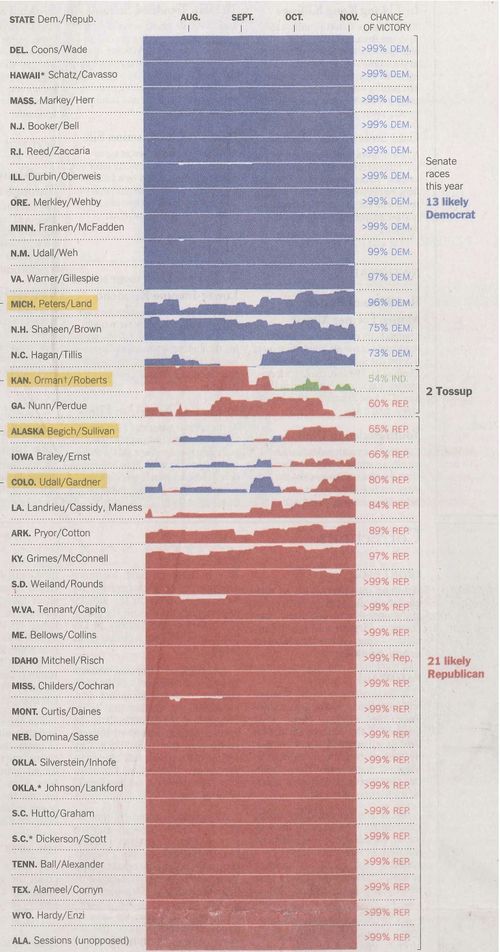 The link to the web page is here. The graphic proudly occupied the front page of the print edition on Tuesday.

This graphic is not cliched. The typical consequence of such a statement is that it has to come with a reader's manual. The beauty of this beauty is that the required manual is compact:

If you stick to the above, you will do fine.

If you start thinking the height of the area is the chance of winning, you run into trouble.

***
Here is a more conventional way to show time-series projections. It is a mirrored line chart, in which one of the two lines is redundant. (This chart shows up elsewhere on the NYT site.)

To turn this into the other style, draw a line through the 50-percent level, erase everything below 50, and then switch from line to area.

On the far right, where it says 75%, you can see that it is precisely half-way between 50 and 100 percent. So the new chart breaks the start-at-zero rule for area charts.

Except... this is an ingenious violation of that rule. Like I said, if you are able to get your head around to thinking that the area maps to lack of competitiveness (or, the amount of lead the leader has, regardless of who's leading), and suppress the urge to interpret the areas as the chance of winning, then the axis starting at 50-percent is not a problem. (I'm assuming that most of these races are in essence two-horse races. If there are more than two viable candidates, this particular chart form doesn't work.)

The payoff is a very compact chart that shows a lot of data in a small space. The NH race was a lock for the Democrats at the start bu the lead kept dwindling so that on the eve of the election, the lead has been cut in half. But the halved chance is still 75 percent in favor of the Dems.

Iowa and Colorado both flipped from Democratic to Republican lead around middle of September.

When the visualization is driven well, the readers have an effortless ride.