Misguided warheads in the classroom

Alberto Cairo just gave a wonderful talk to my workshop, in which he complains about the state of dataviz teaching. So, it's quite opportune that reader Maja Z. sent in a couple of examples from a recent course on data visualization for academics. She was surprised to see these held out as examples of good work. I'll discuss one chart today, and the other one some other day. 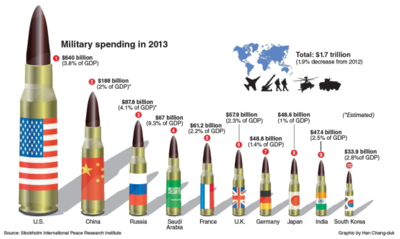 The original is from a Korean newspaper.

The instructor for the course praised this chart for this principle: "always try to find a graphic that relates to your subject, like the bullets here representing military spending, and use it in the chart."

For students who take my class, they learn the opposite lesson: I like to say imagery often backfires. I do like charts with imagery that makes the data come alive but more often than not, the designer falls in love with the imagery and let the data down.

This chart presumably shows the top 10 military spenders in the world by total amount spent in 2013. You'd think that the Chinese spent a bit more than half what the Americans did. But the data labels say $640 billion vs $188 billion, only about 30%. Next, the Russian spend is 46% of the Chinese according to the data, etc. So, is this really a data visualization or just some pictures with numbers printed next to them?

It's possible that the data is encoded in the surface areas or the volumes of these warheads but in reality, this is a glorified column chart, so most readers will respond to the heights of the columns.

Perhaps the shadows are there to demonstrate shadow spending.

The designer seems to appreciate that total spending is not necessarily a great metric. Spending as a proportion of GDP is provided as a secondary metric. I'm not so sure what to make of this though: should we expect richer nations to need/want to spend more building bombs and such? It just doesn't seem very logical to me.

Instead, a more meaningful metric might be military spending per capita. Controlling for population seems somewhat logical; the more people you have to protect, the more money you have to spend.

In the end, I made this scatter plot that tries to have it both ways: 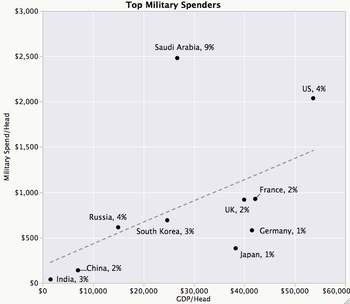 (The percentages are of GDP.)

Here, we can see that Saudi Arabia and the U.S. are particularly aggressive spenders, spending over $2000 per person per year. The respective two dots are way above the average line (for the top 10 spenders). At the richer end of the scale, the American spending is way above the international average. On the other hand, Japan and Germany both spend significantly less than would be predicted by their GDP per capita levels.

Of note, readers more easily relate to the per-capita numbers than the aggregate figures in the original chart. They learn, for instance, that Saudi Arabia's average GDP was $27,000 per head, of which $2,500 went to arming itself up.

It's still not a simple comparison. The US is also easily the largest contributor to NATO (in both dollars and troops), and many European countries may actually spend far less than they would otherwise by relying on NATO. In that sense, the US is subsidizing the military spending of those countries.

Tristan: A valid point. Care to show us your analysis?

Also, the image of a bullet/warhead/mushroom cloud/whatever isn't...a sympathetic one. I imagine there are others like me that would be turned off by it and totally stop reading, let alone get it closer to my face in order to read the tiny print with the actual data. Graphics as a replacement for chart body only make sense when neutral. In my experience.