Data decorations, ornaments, chartjunk, and all that

Alberto Cairo left a comment about "data decorations". This is a name he's using to describe something like the windshield-wiper chart I discussed the other day. It seems like the visual elements were purely ornamental and adds nothing to the experience--one might argue that the experience was worse than just staring at the data table.

It just happens that I have another example of such a chart, submitted by Xan. This one is from Consumer Reports, and illustrates some findings from a recent survey on what things air travellers hate most. Good luck figuring all this out! 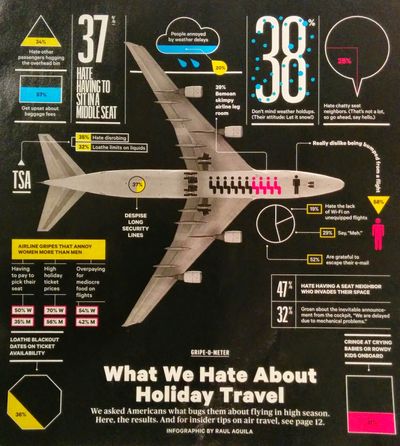 A few of these ideas work, such as the complaints about leg room being tied to the seated passengers inside the plane. But then, the data about people hating middle seats is placed on the upper left corner between the left wing and the tail. All of the atypically shaped charts (the cloud, the triangle, the octaogon) seem to use the oft-criticized convention of coding the data onto just one dimension of these multi-dimensioned objects. I just find the organization of the text confusing and poorly structured.

Xan pulled something from a much older Consumer Reports. And they dared to use a boring bar chart: 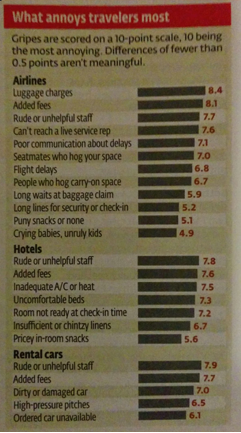 A nice compromise would be to create some subsections under Airlines to group different types of complaints (stuff relating to seating, stuff about service, stuff about punctuality, etc.). Ask a designer to draw some icons (remember the NYT dog graphic!)

Personally, although not ideal, I think there's a place for infographics when done well and can help people engage with data that would otherwise be turned off.

This one made me want to set fire to my face so I didn't have to look at it.

I couldn't agree with this more! I got the new Consumer Reports and felt that it was so scatter brained and I would much rather see the old bar graphs (or some well-thought of compromise). Thanks!!