Junk Charts
Welcome Twitter About Book Blog RSS
Hypothesis: pie charts are correlated with muddled thinking. But which direction is the causal arrow?
Data decorations, ornaments, chartjunk, and all that

I am mystified by the intention behind this chart, published in NYT Magazine (Sept 14, 2014). 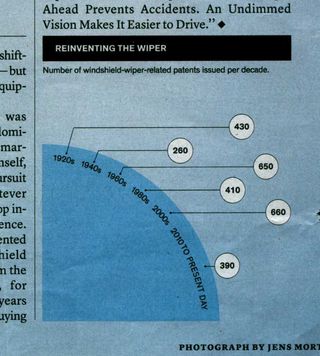 It is not a data visualization since the circles were not placed to scale. The 650 and 660 should have been further to the right on a horizontal time scale. And if we were to take the radial time axis literally, the 390 circle would be closest to the center.

It is not a work of art. It doesn’t look particularly appealing. Sometimes, designers are inspired by imagery. The accompanying article concerns windshield wipers, and I’m not seeing the imagery.

The arrangement of the circles actually interfere with the reader’s comprehension. Here is a straightforward version of the data as a column chart. 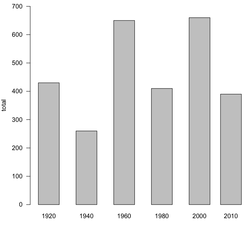 Now, let’s turn it on the side, with time running vertically instead of horizontal (the convention). 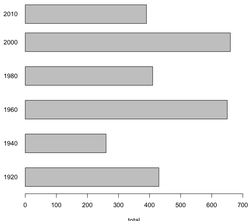 Then, we need to invert convention once again by making the vertical axis run in reverse so that time runs from up to down, instead of down to up. 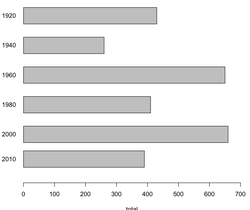 Finally, distort the frequency axis, replace the bars with circles, and you have essentially replicated the original.

The point is each step obscures the pattern more. In this case, following conventions makes a better chart.

I have a pet peeve about presenting partial data next to complete data, even if it is labeled correctly. On this chart, the number 390 cannot be compared against any of the other numbers because we are not even half way into the decade of the 2010s. Instead of plotting total number of patents per decade, it would have been more useful to plot number of patents per year in each decade. 43, 26, 65, 41, etc. For the 2010s, I am assuming they have data for 3.5 years. 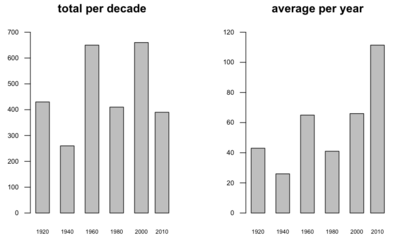 The per-year view shows that the 2010s is unusual. Of course, I should add a footnote to the chart to make it clear that we only have partial data for 2010, and that the assumption behind the averaging is that the pace of patents will remain the same on average for the remainder of the decade.

In the Trifecta Checkup, this is Type DV.

Last night I wrote that we should start calling this kind of graphic "data decoration":

I can't claim ownership of the term, I believe. I think that Tufte and Few have used similar terms themselves.

It's interesting that a graph isn't needed to support the article, which only says "...windshield wipers have been re-engineered again and again." If the sentence said "hundreds of times", or "almost 3000 times since 1920", maybe some evidence world have been worthwhile.