Hypothesis: pie charts are correlated with muddled thinking. But which direction is the causal arrow?

RealClimate (link) deserves a pie in the face for printing a set of pie charts. (Thanks to @guitarzan for the tip.)

This is a case of the chart telling a different story from the data. Let's look at one of the charts, piece by piece.

The first pie(ce) suggests that methane and carbon dioxide (CO2) adds up to some total. That is the only way to read a pie chart. A pie chart shows components of a whole.

What is the whole? It's hard to interpret without some explanation. The title at the bottom says "Radiative Forcing change over the last 30 years" with a footnote disclosing... hold your breath... "Radiative forcings from other gases and human impact are not shown."

In other words, the visual object says that Radiative forcing from CO2 is about 5 times larger than that of Methane. A column chart would have displayed this relative scale more clearly.

But that chart is only one of a pair. Here is the whole picture: 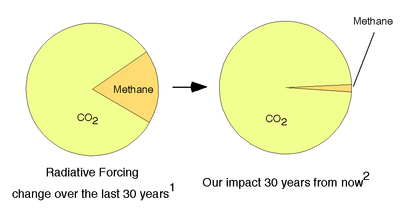 But such an interpretation would almost surely be wrong. The designer left a misleading cue here, which is to show two pies of equal size. There is just no conceivable way that the total "radiative forcing change" is identical in the last 30 years to that in the next 30 years.

The second pie chart also has a footnote. A better person can help me interpret what the following sentence means:

The radiative forcing that our current emissions have committed us to, 20 years from now, is based on a 300-year initial drawdown time scale for carbon dioxide, and 12 years for methane

I'm sure these words say something to a climate expert but this attempt stinks as a piece of public communication.

Returning to the equal-size pies for a moment. Since all other factors are removed, the chart only shows us the relative impact of Methane versus Carbon dioxide. If the data are to be believed, then the scale of the impact of Methane is expected to become much smaller relative to that of CO2 in the next 30 years. This does not imply that the absolute impact of Methane will be lower in the future than in the past.

There are three possible stories, all consistent with the above chart:

It is the designer's job to make it clear to readers the story of the data.

The fact that the entire blog post contains a PDF image and no words is either laziness or arrogance. The title of the piece is "the story of methane, in five pie charts". I don't know what the story of methane is. I doubt that the intention of the author was to tell us that methane is extremely unimportant relative to CO2.

PS. Steven below linked to a response from RealClimate.org. They confirm that the "story of methane" is that it is unimportant relative to CO2. Perhaps they should have called it the "non-story of methane". They see no problem with these pie charts.

"I doubt that the intention of the author was to tell us that methane is extremely unimportant relative to CO2".

Looking at other blog entries at that site let's me assume that this is exaxtly the point he is trying to make.

On the other hand, your blog post's headline hypothesis makes me doubt if your main concern with realclimate.org is about data viz.

The author you castigated has responded to your critiques

Jan: When the title of a blog post is "The story of methane, in five charts", one would expect to be able to understand the story without scrolling through a bunch of other blog posts that aren't cross-linked.
I don't have a concern with realclimate.org. I made a post about a specific blog post that contains an inappropriate use of pie charts.

Steven: thanks for the link. I stand behind my argument that the blog post is a example of poor public communications, and claiming that dropping data is a "conservative" choice and not addressing how a pie chart is used to illustrate data that do not add up to 100 percent just strengthened my case.

As a rebuttal to deniers who claim that too much fuss is made about CO2 from cars when all these farting cows are much more dangerous, this makes sense.

Got that Kaiser? You're a "self-proclaimed" expert.

You skipped over the last 2 panels which are truly horrific - especially that bush league cut away thing in the second part. They should have made it 3d so I'd be sure it was a joke.

The author's responses are childishly defensive, quite frankly.