This chart published in Harvard Magazine has won my heart. 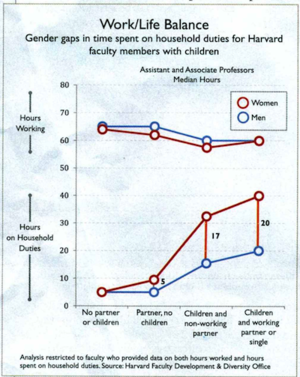 It is well executed in many ways. The chart illustrates a study of time spent by assistant and associate professors. It focuses specifically on time spent working versus time spent on household chores. One of the obvious questions of the study is whether female professors are disadvantaged when they have family obligations.

The general visual framework is the profile chart. Four segments of professors are arranged left to right from single with no children to married, with children and both parents working or single parent. The chart makes these points clear:

In the meantime, the amount of time spent working is about the same for all four segments, raising a side question: what other activities got displaced? The juxtaposition of the lines allows us to see that the displaced hours are almost 50 percent of the total time spent working! What did they do less of?

I especially like the explicit depiction and labeling of the "gender gap" (the orange vertical lines). Also, the use of median hours instead of average hours.

My one little complaint is that the designer forgot to tell us the hours are off a weekly basis (I'm guessing here). Just adding "per week" after "median hours" would have fixed this.

One simple chart cannot address all possible questions on such a complicated subject. I like the restraint the designer exercised in not saddling the chart with too many questions.

I will just mention one tricky statistical issue. Getting tenure and making babies are both activities that occur within some time window in a professor's life, if at all. So there is a survivorship bias. The professors who receive tenure drops out of the picture. If you are older, and still in the pool, you probably are less "accomplished" from the perspective of the tenure-granting process. The longer you stay in that pool, the more likely you will have gotten married and/or have children--thus, there is an age bias going from left to right, as well as a survivorship bias. This implies that the characteristics of the professors in the four groups are likely to be different not just on their marital and child-rearing statuses but also on age and probability of tenure.

If I read the chart correctly, women professors with children and either no partner or a working partner report working 60 hours a week at their Harvard job and 40 on household duties, a total of 100 hours a week, or a little over 14 hours per day. I'm a parent (father) with children (young) and no partner, and I work 60 hours or so per week, but I don't spend anything like 40 hours a week on household duties. I don't think that I could dream up enough housework to fill that much time -- unless you count every moment that a child is awake as a working moment. Personally, though, if I'm playing with the kids, much less reading or watching TV or having a drink with friends while the kids entertain themselves, I don't count that as work.

Would it be wrong to suggest that some Harvard professors may have a rather expansive definition of what constitutes "work" at home, or a rather obsessive idea of what household work is worth doing, or a rather overbearing view of how closely they ought to supervise, instruct and direct their children? Just a guess: maybe they should spend less time dreaming up new household projects for themselves (and their partners?) and hovering over their kids and more time relaxing and letting the kids have a little air.

Very interesting study. I am learning the nuts and bolts of economics, critical thinking, and international finance and while so of this is still a bit hazy (please forgive I am fairly new at this) I actually understand the key points. I am heartened to know that my "gut instinct" about the realities of the Gender Gap is being borne out by scientific method inquiry!

A peculiarity about the chart that I found interesting and that might seem to suggest another tricky statistical issue: whether men and women view work and partnership in the same way and hence whether their survey answers are truly comparable. When single without children, both men and women report that they spend about 5 hours per week on household chores. When partnered without children, men report that their housework decreases to 4 hours per week, but women report that their own housework increases to 9 hours per week. When single, the two partners combined do 10 hours of work, but when partnered, their combined work increases to 13 hours.

To make meaningful inroads into answering these questions would require a much more extensive survey than was undertaken here, but they do suggest that the meme of “men dumping their work onto women” might not be the sole reason for the gender gap. One initial test of these hypotheses might be to break out separate figures for straight, gay and lesbian couples. If we found that (1) in gay couples, both partners report doing 4 hours of work, (2) in straight couples, men report doing 4 hours of work and women report doing 9 and (3) in lesbian couples, both partners report doing 9, that phenomenon might support one set of hypotheses. If instead we found that (1) in both gay and lesbian couples, the partners reported doing 6 hours each, while (2) in straight couples, men reported doing 2 hours of work and women reported doing 15 hours, that phenomenon would support a different set of hypotheses.

Couples with children raise additional issues. For example, do men have a more laissez-faire attitude than women towards child-rearing (that is, to believe that children need less supervision, instruction and direction than women think they need)? Again, a breakdown of gay, lesbian and straight couples might be somewhat illuminating.

I also notice that the chart combines single parents and partnered parents into a single category. Maybe there aren't enough single professors with children at Harvard to make separate categories worth reporting, or maybe there aren't enough male professors like that to enable comparisons between men and women. But it would still be an interesting additional data point.

Of course, putting all of these data into a single chart would detract considerably from the elegance and clarity of the chart. And maybe the study does address these questions, just not in this particular chart.

I like the graph but I'm always fairly dubious about data collected in this way. People's recollections about what they did is invariably fairly poor, although I expect a lot of the academics do work fairly long hours.

Another statistical point not mentioned: This study looks like it is cross-sectional, meaning that the differences (such as that 20 hour gap in household work for Professors with working partners) are also reflective of cultural changes potentially.

Given there's an age bias from left to right, there is also a cultural bias - older people tend to reflect the cultural beliefs that were the norm a longer time ago so as we go left to right it's also like stepping back in time to a world where it was expected that women would do more housework.

Another interesting thought is about the pathways people might take to each of these categories - there are many more ways to end up in the fourth category than any of the others. A good chart makes so many people's brains crank into action, it yields much greater results than the same information communicated differently.

I like a lot of the details of the chart set up, but I can't get past using a line chart for categorical data like this...

A dot plot with no connecting line would show the data at least as well without confusing it by connecting non linear elements.

The vertical line showing the disparity is a separate issue that I think works just fine.

@officiousintermeddler:
"Intuitively, a partnership ought to create efficiencies, decreasing the total combined hours of work by enabling the partners to eliminate duplicative tasks."

This sounds like something only a single person could say :)

It seems a lot of your post(s) is a build up to trying to subtly say that women hover, nag, and complain, and that's why the numbers look the way they do.

I am not trying to put words in your mouth, but the sum of your two posts combined seem to trying to point in that direction.

Another hypothesis that you should consider is that maybe mothers are simply more like to spend more time actually doing things with their children as opposed to just being present than fathers are.

Another is that maybe men are more prone to feeling as though they are required to do less in the way of housework and child rearing when they have a woman partner, as they are more likely to be conditioned to think of those things as women's work and as something that will done for them. Especially in the case of older generations.

About the vertical lines I think they are ok but you should understand that it is like showing absolute difference with different base lines. Not too good.
If you are interested in relative difference you should calculate that and show that.
This is often the case: Trying to do two or more things in one chart that are not possible.