World Bank fails to lead the way in #dataviz 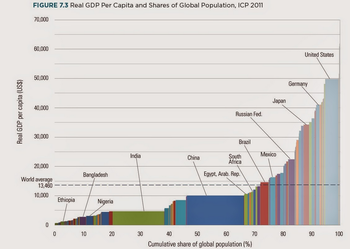 His comment was: "We can see that while China has overtaken Germany and Japan to become the world's second-largest economy (i.e., total area of the rectangle) its citizens are nowhere near being as rich as those of those countries or even Mexico."

Yes, the chart encodes the size of the economy in a rectangular area, with one side being the per-capita GDP and the other being the population. I am not sure about the "we can see". I am not confident that the short and wide rectangle for China is larger than the thin and tall ones for Japan and for Germany. Perhaps Matthew is relying on knowledge in his head, rather than knowledge on the chart, to come to this conclusion.

This is the trouble with rectangular area charts: they have a nerdy appeal since side x side = area but as a communications device, they fail.

Here are some problems with the chart:

Matthew should also have mentioned PPP (Purchasing Power Parity). If GDP is used as a measure of "wellbeing", then costs of living should be taken into account in addition to incomes. The cost of living in China is much lower than in Japan or Germany and using the prevailing exchange rates disguises this point.

In the Trifecta Checkup, this is a Type QDV.

Try your hand at fixing this one. There are no easy solutions. Does interactivity help? How about multiple charts? You will learn why I classify it as QDV instead of just DV.

[Update, 8/18/2014:] Xan Gregg created a scatter plot version of the chart. He also added, "There is still the issue of what the question is, but I'm assuming it's along the lines of "How do economies compare regarding GDP, population, and GDP/capita?" I'm using the PPP-based GDP, but I didn't read the report carefully enough to figure out if another measure was better." 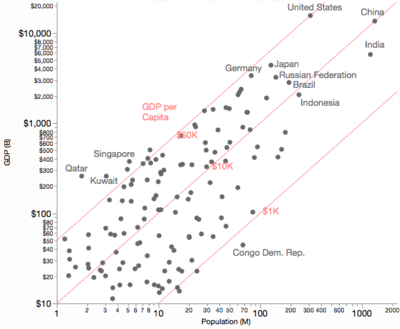