Dataviz worth your time

The New York Times Upshot team came up with a dataviz that is worth your time. This is a set of maps that gives a perspective on migration patterns within the US. The metric being portrayed is the birthplace of current residents of each state.

Here is the chart for California: 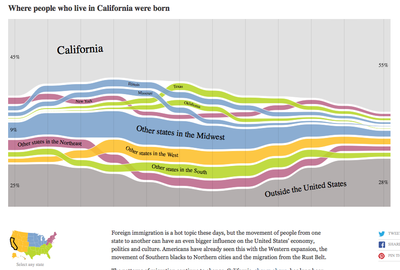 I see a few smart ideas, starting with the little map on the bottom left. It servies multiple functions. It is a legend mapping colors to four regions of the US. It serves as a visual guide to the definition of regions. It serves as an interactive tool to select states.  Readers might remember the use of a pie chart as a legend in my remake of one of the Wikipedia pie charts (link).

The aggregation up to regions is what really makes this chart work. This aggregation reduces the number of pieces from about 50 to about 10.

Users can interactively hover over the gridlines to uncover the data labels.

As you scroll through the states, there are some recurring patterns.

This pattern is repeated in other southeastern states, including Virginia, North Carolina and Tennessee. 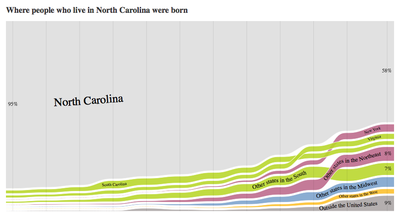 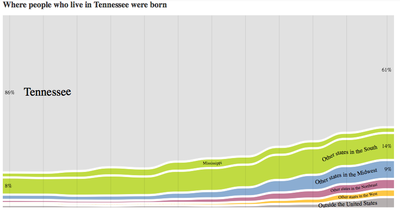 By contrast, some states are not getting the migrants. As a result, the share of residents born in the home state has increased over time. The Midwestern states have this problem. For instance, Minnesota: 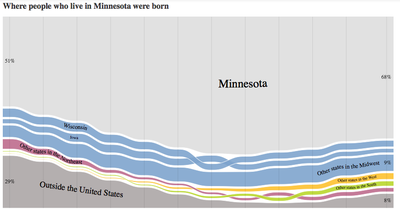 I also find a few states with special features. Nevada has always been a state of migrants: 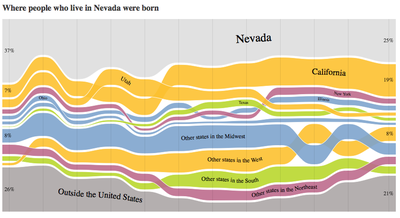 Wyoming on the other hand has become popular with migrants over time but the composition has shifted away from MidWest states. I'd have preferred presenting the charts in clusters based on patterns.

I haven't been able to figure out the multi-color spaghetti. I think the undulations are purely for aesthetic reasons.

One way to read the chart, then, is to first see three big patches (light grey for born in current state; white patch for born in other U.S. states; dark gray for born outside the U.S.). Within the white patch, we are looking for the shift between the colors (i.e. regions).

The undulations correspond to the rank contribution by the state, so each ribbon is larger than the one before. And it's on a per/state basis, so when the designer has aggregated the states into regional blocks, they stay at the bottom, in their own rank ordering. In the Nevada example, most of the immigration has come from California, except in 30s where Utah overtook it. I think it adds a level of story to the graphics

Paulie: Thanks for the note. It does complicate reading the chart if one wants to get to that story. You'd have to compartmentalize the states into (a) same state (b) individual states that deserve their own pieces (c) aggregated "others" and (d) outside U.S. Then within (b) and (c), the pieces are fluctuating according to rank. This is a case of an innovative feature fighting with the aggregation scheme. I do like the aesthetics but wonder if it's worth it.

It seems like it'd be helpful if the "outside the US" segment was further subdivided into at least continents. Using California as an example, migrants to CA from external has remained relatively consistent since 1900, but given the timing of these charts and the larger discussion regarding immigration reform, it sort of seems like the design seeks to avoid the more immediate question. In fairness, the NY Times is clear about the question they're trying to answer "how have Americans migrated" and thus the segment they're highlighting makes sense in the graphic. But I do wonder whether the question they posed in the first place is really "interesting."

I like the graphs but I'm not sure how to interpret the white spaces between the colored bands.

Andrew: The whitespace at first glance made me uncomfortable. They feel like extra-thick boundary lines. Eventually I came to terms with them. It allows me to ignore the details of those colored lines and read the chart in three large groups, the local born, the migrants from within the US and the migrants from outside the US. I am not sure if that was their intention but it's functional that way.