Announcement: I'm giving a free public lecture on telling and finding stories via data visualization at NYU on 7/15/2014. More information and registration here.

The Economist states the obvious, that the current World Cup is atypically high-scoring (or poorly defended, for anyone who've never been bothered by the goal count). They dubiously dub it the Brazil effect (link).

Perhaps in a sly vote of dissent, the graphic designer came up with this effort: 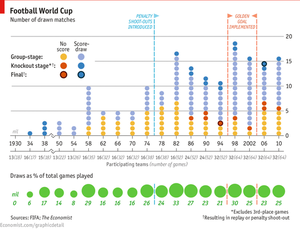 (Thanks to Arati for the tip.)

The list of problems with this chart is long but let's start with the absence of the host country and the absence of the current tournament, both conspiring against our ability to find an answer to the posed question: did Brazil make them do it?

Turns out that without 2014 on the chart, the only other year in which Brazil hosted a tournament was 1950. But 1950 is not even comparable to the modern era. In 1950, there was no knock-out stage. They had four groups in the group stage but divided into two groups of four, one group of three and one group of two. Then, four teams were selected to play a round-robin final stage. This format is so different from today's format that I find it silly to try to place them on the same chart.

This data simply provide no clue as to whether there is a Brazil effect.

The chosen design is a homework assignment for the fastidious reader. The histogram plots the absolute number of drawn matches. The number of matches played has tripled from 16 to 48 over those years so the absolute counts are highly misleading. It's worse than nothing because the accompanying article wants to make the point that we are seeing fewer draws this World Cup compared to the past. The visual presents exactly the opposite message! (Hint: Trifecta Checkup)

Unless you realize this is a homework assignment. You can take the row of numbers listed below the Cup years and compute the proportion of draws yourself. BYOC (Bring Your Own Calculator). Now, pay attention because you want to use the numbers in parentheses (the number of matches), not the first number (that of teams).

Wait, the designer provides the proportions at the bottom of the chart, via this device:

As usual, the bubble chart does a poor job conveying the data. I deliberately cropped out the data labels to demonstrate that the bubble element cannot stand on its own. This element fails my self-sufficiency test.

I find the legend challenging as well. The presentation should be flipped: look at the proportion of ties within each round, instead of looking at the overall proprotion of ties and then breaking those ties by round.

Also notice the footnote, stating that third-place games are excluded from the histogram. This is exactly how I would do it too because the third-place match is a dead rubber, in which no rational team would want to play extra-time and penalty shootout.

The trouble is inconsistency. The number of matches shown underneath the chart includes that third-place match so the homework assignment above actually has a further wrinkle: subtract one from the numbers in parentheses. The designer gets caught in this booby trap. The computed proportion of draws displayed at the bottom of the chart includes the third-place match, at odds with the histogram.

Here is a revised version of the chart: 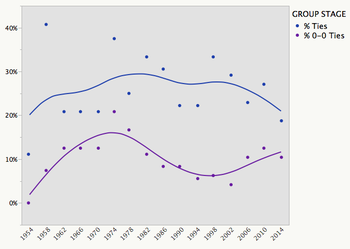 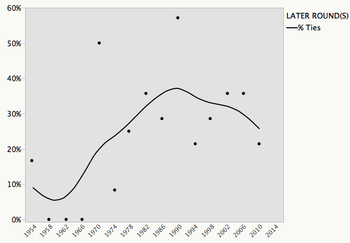 A few observations are in order:

Another reason for separate treatment is that the knockout stage has not started yet in 2014 when this chart was published. Instead of removing all of 2014, as the Economist did, I can include the group stage for 2014 but exclude 2014 from the knockout round analysis.

In the Trifecta Checkup, this is Type DV. The data do not address the question being posed, and the visual conveys the wrong impression.

Finally, there is one glaring gap in all of this. Some time ago (the football fans can fill in the exact timing), FIFA decided to award three points for a win instead of two. This was a deliberate effort to increase the point differential between winning and drawing, supposedly to reduce the chance of ties. Any time-series exploration of the frequency of ties would clearly have to look into this issue.