A small step for interactivity

Alberto links to a nice Propublica chart on average annual spend per dialysis patient on ambulances by state. (link to chart and article) 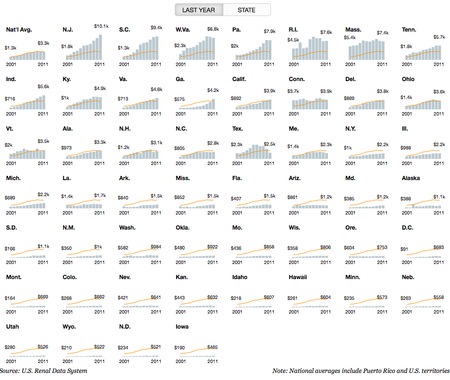 It's a nice small-multiples setup with two tabs, one showing the states in order of descending spend and the other, alphabetical.

In the article itself, they excerpt the top of the chart containing the states that have suspiciously high per-patient spend.

The first comparison is simple as it happens inside each chart component.

The second type of comparison is enabled by the orange line being replicated on every component. (I'd have removed the columns from the first component as it is both redundant and potentially confusing, although I suspect that the designer may need it for technical reasons.)

The third type of comparison is also relatively easy. Just look at the shape of the columns from one component to the next.

The fourth type of comparison is where the challenge lies for any small-multiples construction. This is also a secret of this chart. If you mouse over any year on any component, every component now highlights that particular year's data so that one can easily make state by state comparisons. Like this for 2008:

You see that every chart now shows 2008 on the horizontal axis and the data label is the amount for 2008. The respective columns are given a different color. Of course, if this is the most important comparison, then the dimensions should be switched around so that this particular set of comparisons occurs within a chart component--but obviously, this is a minor comparison so it gets minor billing.

I love to see this type of thoughtfulness! This is an example of using interactivity in a smart way, to enhance the user experience.

The Boston subway charts I featured before also introduce interactivity in a smart way. Make sure you read that post.

Also, I have a few comments about the data analysis on the sister blog.