A graphic illustrating how Americans spend their time is a perfect foil to make the important case that the reader's time is a scarce resource. I wrote about this at the ASA forum in 2011 (link).

In the same WSJ that carried the DSL speed chart (link), they boldly placed the following graphic in the center of the front page of the printed edition: 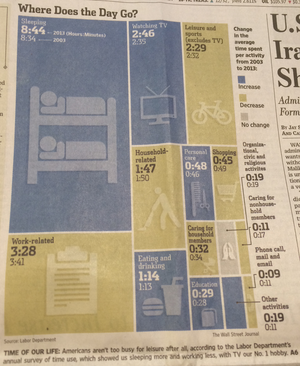 The visual form is of a treemap displaying the results of the recently released Time Use Survey results (link to pdf).

What does the designer want us to learn from this chart?

What jumps out first is the importance of various activities, starting with sleep, then work, TV, leisure/sports, etc.

If you read the legend, you'll notice that the colors mean something. The blue activities take up more time in 2013 compared to 2003. Herein, we encounter the first design hiccup.

Next, if we have time on our hands, we might read the data labels. Each block has two labels, the absolute values for 2003 and for 2013. In this, the designer is giving an arithmetic test. The reader is asked to compute the change in time spent in his or her head.

It appears that the designer's key message is "Aging Americans sleep more, work less", with the subtitle "TV remains No.1 hobby". 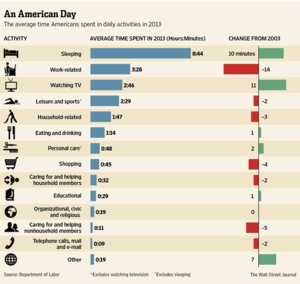 Now compare the treemap to this set of "boring" bar charts.

This visualization of the same data appears in WSJ online in lieu of the treemap. Here, the point of the article is made clear; the reader needs not struggle with mental gymnastics.

(One can grumble about the red-green color-blindness blindness but otherwise, the graphic is pretty good.)

When I see this sort of data, I like to make a Bumps chart. So here it is:

The labeling of the smaller categories poses a challenge because the lines are so close together. However, those numbers are so small that none of the changes would be considered statistically significant.

From a statistical/data perspective, a very important question must be raised. What is the error bar around these estimates? Is there anything meaningful about an observed difference of fewer than 10 minutes?

Except for the top three categories, it's hard to know if the reported differences are due to sampling.

A further problem with the data is its detachment from reality. There are two layers of averaging going on, once at the population level and once at the time level. In reality, not everyone does these things every day. This dataset is really only interesting to statisticians.

So, in a Trifecta Checkup, the treemap is a Type DV and the bar chart is a Type D.