Getting the basics right is half the battle

I was traveling quite a lot recently, and last week, read the Wall Street Journal cover to cover for the first time in a while. I am happy to report that there are many more data graphics than I remember of past editions.

The following chart illustrating findings of an FCC report on broadband speeds has a number of issues (a related blog post containing this chart can be found here): 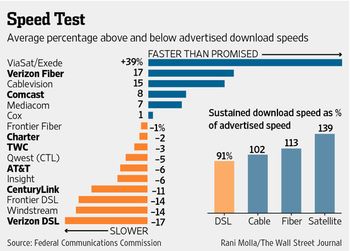 The biggest problem with the visual elements is the lack of linkage between the two components. The two charts should be connected: the one on the right presents ISP averages by the broadband technology while the one on the left presents individual ISP results. Evidently, the designer treats the two parts as separate.

Lastly, I'd prefer they stick to one of "advertised" and "promised". I do like the axis labels, saying "faster than" and "slower".

One challenge of the data is that the FCC report (here) does not provide a mathematical linkage between the technology averages and the ISP data. We know that 91% for DSL is the average of the ISPs that use DSL as shown on the left of the chart, but we don't know the weights (relative popularity) of each ISP so we can't check the computation.

But if we think of the average by technology as a reference point to measure individual ISPs, we can still use the data, and more efficiently, such as in the following dot plot where the vertical lines indicate the appropriate technology average: 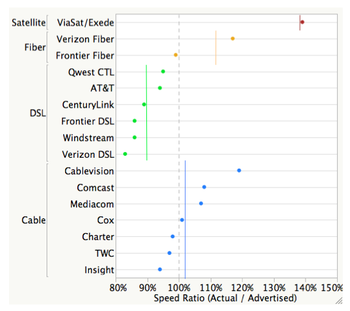 (The cable section should have come before the DSL section but you get the idea.)

The key message of the chart, in my mind, is that DSL providers as a class over-promise and under-deliver.

In a Trifecta Checkup, this is a Type V chart.

Thanks David. That would be their logic. If I were doing separate charts, I'd have selected different color schemes.

@David - that was my initial thought, but it is not the case (as far as I can tell).

Charter is a cable company, Frontier Fiber is surely a fiber company, and they both have values below 100%.

I think TWC is a cable company as well.

I really like your version. it seems like the DSL category should be at the bottom though so the groups are in rank order like the subgroups. great analysis.

Mike: You'd be right (see my critique of my own chart below the chart!)

@jlbriggs: values under 100% are orange, values oevr 100% are blue. Thgat's true for the left-hand (ISP) graph and the right-hand (technology) graph.

As a consumer I would actually be more concerned with actual speed instead of the ratio between advertised/actual. If the ratio is 90%, but the speed is twice as fast as someone whose ratio is 150%, I would rather go with the provider with the worse ratio.

My post was in response to the assertion (made above) that orange was for DSL and blue was for the other types, in both charts, and was not in regard to whether individual companies differed from the average of their type.

@henry - but it's a matter of advertised vs real, not who is fastest.

What is advertised is advertised as a certain speed for a certain price, so it's not a clear matter of "faster wins" (depends what you want to spend), and there is no inherent suggestion that a consumer should buy from whoever has a better ratio.

It's a matter of what you can expect your actual speed to be when you buy a certain advertised speed. It's a tool that can be used to assess whether switching your ISP will get you what the ISP claims it will or not, for example.