The index of an index is confusion 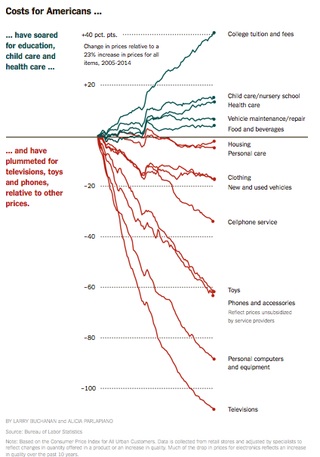 Through twitter, Antonio Rinaldi sent the following chart that accompanied a New York Times piece talking about the CPI (inflation index). The article concerns a very important topic--that many middle- to lower-income households have barely any saving after spending on necessities--and only touches upon the issue raised by this chart, which is that the official CPI is an average of prices of a basket of goods, and there is much variability in the price changes of different categories of goods.

I cover this subject in much greater detail in Chapter 7 of Numbersense (link). There are many reasons why the official inflation rate seems to diverge from our own experiences. One of the reasons is that we tend to notice and worry about price increases but we don't notice or take for granted price decreases. In the book, I cover the fascinating subject of the psychology of remembering prices. Obviously, this is a subject of utmost importance if we are to use surveys to understand perceived prices.

The price of a T-shirt (unbranded) has remained the same or may have declined in the last decades. Besides, the chart reveals that phone and accessories, computers and televisions have all enjoyed deflation over the last decade. Actually, much of the "deflation" is due to a controversial adjustment known as "hedonics". This is to claim that part of any price change is attributed to product or technology improvements. So, if you pay the same price today for an HDTV as in the past for a standard definition TV, then in reality, the price you paid today is cheaper than that in the past.

That adjustment is reasonable only to a certain extent. For instance, my cell phone company stuffs my plan with hundreds of unused and unusable minutes so on a per-minute basis, I am sure prices have come down substantially but on a per-used-minute basis, I'm not so sure.

Let's get to what we care about on this blog... the visual. There is one big puzzle embedded in this chart. Look at the line for televisions. It dipped below -100 percent! Like Antonio, many readers should be scratching their heads--did the price of television go negative? did the hedonic adjustment go bonkers?

As an aside, I don't like the current NYT convention of hiding too many axis labels. What period of time is this chart depicting? You'd only find out by reading the label of the vertical axis! I mentioned something similar the other day.

The key to understanding a chart like this is to learn what is being plotted. The first instinct is to think the change in prices over time. A quick glance at the vertical axis label would correct that misunderstanding. It said "Change in prices relative to a 23% increase in price for all items, 2005-2014".

This label is doing a lot of work--probably too much for its inconspicious location and unbolded, uncolored status.

Readers have to know that the official CPI is a weighted average of changes in prices of a specified basket of goods. Some but not all of the components are being graphed.

Then readers have to understand that there is an index of an index. The prices of each "item" (i.e. category or component of the CPI) are indiced to 1984 levels. So the prices of television is first re-indiced to 2005 as the baseline. This establishes a growth trajectory for television. But this is not what is being depicted. 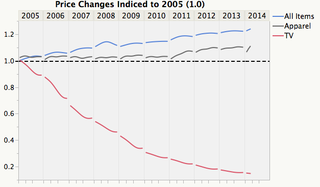 Here is what the chart would have looked like if we plotted the growth of the television index (red), the apparel index and the all-items index (blue).

The blue line reflects the 23% average increase in prices in that 10-year period. Notice that the red line does not exhibit any weirdness--television prices have gone down by 90 percent. It's not negative.

What the designer tried to do is to index this data another time. Think of pulling the blue line down to the horizontal axis, and then see what happens to the gray and red lines.

Even though I reverse-engineered the chart, I don't understand the reason for using subtractions rather than division for the second layer of indicing. It's strange to me to add or subtract the two indices that have different baseline quantities.

Here is the same chart but using division: 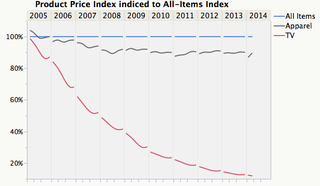 I usually avoid telescoping indices. They are more trouble than it's worth. Here is an old post on the same subject.

I hope your day is going well. I noticed your blog and thought you might want to check out this infographic we just rolled out about 7 Day Diet Plan infographic. Check it out when you have a minute and let me know what you think.

Thanks for taking a look! Hope it was of interest to you,
Romualdas